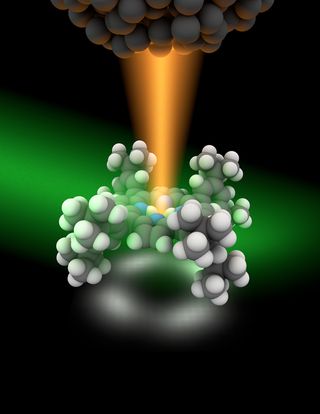 When a weak light beam of green color hits a molecule, the molecule can't be viewed in great detail because the wavelength of light is about the same size as the molecules. But when the molecules is placed under a tip, a field between the tip and the sample produces a much more intense and localized red-light, dramatically improving resolution and producing highly detailed images (shown as the four-lobed shadow underneath.)
(Image: © Guoyan Wang and Yan Liang)

Ultra-powerful microscopy can now peer inside individual molecules, revealing the vibrations of bonds between atoms.

The images of molecular bonds, described today (June 5) in the journal Nature, were achieved using a light-based microscope technique, called Raman spectroscopy, which has existed for nearly 100 years. But the new approach refined the process to get dramatically better results.

"For a long time, it seemed like how much spatial resolution that you can actually get with these optical spectroscopic techniques was limited," said Joanna Atkin, a physicist at the University of Colorado who wrote an accompanying News & Views article in Nature. "A few people had managed to demonstrate 4 nanometer-resolution at very special conditions. What these authors demonstrated is that they could achieve subnanometer spatial resolution."

Yet no one knows exactly why the authors' work succeeded so well in comparison to past attempts, Atkin said. [See Images of the Individual Molecules]

In Raman spectroscopy, particles of light, or photons, from a laser hit molecules that are already vibrating at a certain frequency. The jolt from the laser light changes the vibrational frequency of the atoms, a characteristic molecular fingerprint that reveals the types of atoms and their motion.

In addition to using laser light, R. Zhang, a physicist at the University of Science and Technology of China, and colleagues brought a metallic tip close to the molecules, which can locally enhance the laser field. Researchers had tried this tack in the past and were able to resolve objects that were 4 nanometers or larger, where a water molecule is less than 1 nanometer.

But somehow, the current efforts achieved subnanometer (well below 1 nanometer) resolution — powerful enough to peer inside molecules and view individual chemical bonds vibrating. (Other microscopes not based on light can see objects about as small.)

It's still not clear why the current efforts worked so well.

"There are all kinds of tantalizing hints in their paper of what might be going on, but we can't say definitively," Atkin told LiveScience.

One possibility is that the researchers simply had a very stable system with little vibration. But the team also noticed light emission between the tip and the sample, which could somehow be causing the better view, Atkin said.

In any case, it's unlikely the team could do much better. Using this approach, it's theoretically possible to achieve resolution up to 0.1 nanometers, at which point electrons stop acting as free particles.

"There is definitely a limit and I think they're probably quite close to it," Atkin said.