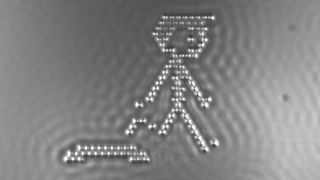 An ensemble cast of carbon atoms stars in the world's smallest stop-motion movie created by researchers at IBM.

The video "A Boy and His Atom" features thousands of atoms that have been carefully arranged into nearly 250 frames with a scanning tunneling microscope (STM), a Nobel Prize-winning tool invented by scientists at IBM three decades ago. The tool first allowed scientists to visualize single atoms.

"It weighs two tons, operates at a temperature of negative 268 degrees Celsius [minus 450 degrees Fahrenheit] and magnifies the atomic surface over 100 million times," Christopher Lutz, an IBM research scientist, said of the machine.

To position the atoms, the team used the microscope to drag a super-sharp needle along a copper surface. This needle, positioned just a nanometer away from the surface, attracted the atoms and pulled them into place so that the scientists could take still images for each movie frame. The film shows a boy playing with a single atom, dancing and jumping on a trampoline. It was verified as the world's smallest stop-motion movie by Guinness World Records.

The moviemakers say there's more to their work than mere novelty. Atoms are the smallest raw materials for data storage devices, and the same researchers who made the stop-motion film also made the world's smallest magnetic bit using just 12 atoms, according to IBM. That's astoundingly small considering a bit of data on the average computer or electronic device today is made up of roughly 1 million atoms. A chip the size of a fingernail using the researchers' 12-atom bits would be able to store all of the movies ever made, IBM researchers say.

"As data creation and consumption continue to get bigger, data storage needs to get smaller, all the way down to the atomic level," IBM researcher Andreas Heinrich said. "We're applying the same techniques used to come up with new computing architectures and alternative ways to store data to making this movie."