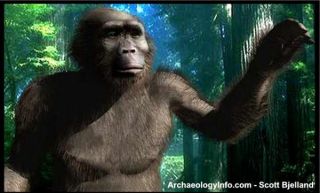 Early human ancestors made a drastic shift in their diet, from eating exclusively fruits and leaves to including grasses and succulents about 3.5 million years ago, new research suggests.

The new results, published in several studies today (June 3) in the journal Proceedings of the National Academy of Sciences (PNAS), were found by analyzing the fraction of different carbon isotopes, or atoms of the same chemical with different molecular weights, in tooth enamel from more than 100 fossilized teeth of several species of early human ancestors.

"Until about 4 million years ago our early hominin ancestors had diets that were, isotopically at least, very similar to chimpanzees'," said Matt Sponheimer, a paleoanthropologist at the University of Colorado at Boulder. "They started eating new things, using the landscape in new ways around 3.5 million years ago. It's very possible that it was one of the important steps in the diversification of our lineage." [The 10 Biggest Mysteries of the First Humans]

Because plants using different methods of photosynthesis to grow absorb different amounts of carbon isotopes, the ratio of those isotopes in dental enamel can reveal insights into the feeding habits of early human ancestors.

For instance, so called C3 plants absorb more of the heavy isotope carbon-13 into tissue than do C4 or CAM plants.

To analyze what the ancient human ancestors were eating, the team analyzed the fraction of different carbon isotopes in teeth from every early human fossil that could be sampled: 175 individuals from 11 different species dating between 4 million and 1.3 million years old. The fossils included the species Australopithecus afarensis, the species that includes the 3.2-million-year-old "Lucy," as well as early Homo species.

Prior to about 3.5 million years ago, human ancestors ate exclusively C3 plants. But after that, despite living in a very similar environment, their diet underwent a radical transformation to include C4 and CAM plants.

That signified a change from eating exclusively leaves and fruits to foods derived from grasses and succulents. That could include grass seeds and underground roots, and even termites or small, scavenged animals, although the exact composition of the diet still remains a mystery.

The findings suggest that beginning around the time of Lucy, human ancestors seem to have transitioned from a fairly restricted diet to one with more variety, and that may have led to their diversification, Sponheimer said.

"Lucy and her like, they seem to be willing to eat just about anything," Sponheimer told LiveScience.

By contrast, some species such as Paranthropus bosei, or "Nutcracker Man" were becoming more specialized, narrowing their diets and focusing on C4 foods. Though its large jaws were originally thought to be used for cracking nuts, in fact, now researchers believe they used their jaws to grind grasses and seeds.

The findings largely confirm what scientists suspected, Richard Klein, a biologist at Stanford University, wrote in an accompanying commentary article published in PNAS.

"Twenty years ago, we might have guessed, based mainly on the savanna settings in which early hominins evolved, that they depended increasingly on grassy foods or on creatures that ate grasses. The craniodental morphology of P. boisei might also have led to us to speculate that it relied on grassy foods to a particularly great extent," Klein wrote. "Now, thanks to stable-isotope analyses, we no longer have to guess, and the broad pattern of early hominin dietary evolution is established."