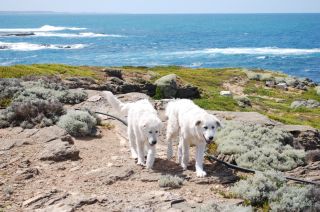 Penguin-snatching foxes are no match for Maremma sheepdogs, bred to guard against wolves in Italy's mountains. Since a pair of dogs was stationed on Southern Australia's rocky Middle Island during breeding season starting in 2006, the population of Little Penguins has soared from less than 10 to nearly 200, the New Zealand Herald reported. No foxes have killed penguins in the past seven years, according to a report by the Nature Glenelg Trust, which monitors the project.

Little Penguins are the smallest penguin species and live on the Australia's and New Zealand's islands and shores. The red foxes, an invasive species, reach the islands by swimming in shallow water from the mainland.

Australia has a history of dubious experiments in using one species to control another, such as the invasive and poisonous cane toad, introduced to combat sugarcane-nibbling cane beetles. And there were a few hurdles at first, such as the dogs scaring the baby penguins to death when they herded them back to their nests, the Herald reported. That behavior was quickly fixed. Now, the Maremma guardian dog project is so successful its now used on nearby Point Danger for gannet birds, and won a 2010 Australian Government environmental award.