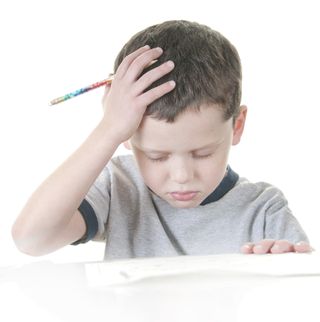 Emotional memories may be strengthened while children sleep, but not for those with ADHD, a new study says.
(Image: © Schoolwork photo via Shutterstock)

Emotional disturbances in children with ADHD may be related to activity in their brains during sleep, a new study suggests.

The researchers found that sleep seemed to help strengthen emotional memories in healthy children, but not in children with ADHD.

Moreover, the pattern of electrical activity in frontal regions of the brain during sleep was different in healthy children than in children with ADHD, according to the study that was published Wednesday (May 29) in the journal PLOS ONE.

The researchers said that the findings could give insight into the emotional problems commonly that occur in children in ADHD. Kids with ADHD may be more likely to engage in risky behaviors, or to not learn from a negative experience, than children without the condition.

"Our study should be understood as a hint that ADHD is not only a 'daytime' problem, which ends at the end of the day," said Alexander Prehn-Kristensen, study researcher from Christian-Albrecht-university in Kiel, Germany. However, more research is needed before any ADHD treatments might result from this study, he said.

Emotional experiences are easier to remember than ones than leave humans unmoved. Studies have shown that pictures of emotionally charged items, such as a snake, usually evoke stronger and broader brain responses, and result in clearer memories, compared with neutral pictures, such as one of an umbrella.

Activity in certain regions of the brain during sleep is believed to help consolidate memories that have emotional relevance, according to previous research. "We wondered whether sleep might contribute to how children with ADHD process emotional experiences," Prehn-Kristensen said.

In the study, 16 healthy children, 16 children with ADHD and 20 healthy adults were shown emotionally charged and neutral pictures. To assess the effect of sleep on the formation of memories, participants were shown pictures in the evening, and then their brain activity was monitored as they slept. Their recollections of the pictures were tested the following morning, and these memories were compared with those of a separate test, in which the participants viewed pictures in the morning and were tested that evening.

Healthy children showed stronger memories of the emotional pictures after sleeping. But the effects of sleep were not as strong in children with ADHD, or in healthy adults, the results showed.

The electrical activity in the frontal brain regions of healthy children was stronger compared with that of children with ADHD, and it was associated with better recollection of emotional pictures compared with neutral images, the researchers said.

Prehn-Kristensen noted that further research is needed to determine whether the results of the study apply to real-life emotional memories in children with ADHD.

The findings suggest that sleep-related deficits may have a role in the daytime emotional problems that children with ADHD experience, the researchers said. Future studies are needed to see whether or not the memory-supporting functions of sleep are regained after puberty in children with ADHD, they said.