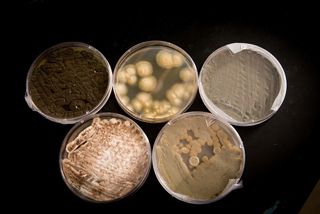 The study was spurred by reports of consumers finding mold — mats of fungus consisting of millions of cells — in the drink.

While the findings have an "ick" factor, the fungi probably aren't harmful to most people, said study researcher Kathleen Dannelly, associate professor microbiology at Indiana State University. Fungi are all around us — in the soil, air, and even on our skin and inside our digestive tract — but they are generally kept in check by our immune systems.

"Probably, those of us with healthy immune systems, we could even eat that, and that wouldn’t be a problem," Dannelly said, referring to the fungal mats in Capri Sun.

However, for people with compromised immune systems, such as those with AIDS, leukemia or cystic fibrosis, fungus exposure may be a health concern, Dannelly said.

For instance, the fungus Aspergillus is found in air, and most people breathe it in without problems. But for those with compromised immune systems, the fungus can cause lung and other infections.

Kraft, which manufactures Capri Sun, acknowledges that mold can grow in the drink, but says such reports are not common.

"Since there are no preservatives in our drinks, mold can grow, especially in a leaking pouch," Kraft says on its Capri Sun frequently asked questions website.

During the manufacturing process, the drinks are heated to temperatures that exceed those used for pasteurization. But punctures in the products' package — even microscopic ones — can allow air inside the package, and mold to grow, Kraft says. Fungi need oxygen to grow, Dannelly said.

Capri Sun packages have a shelf life of about a year. The company urges consumers to discard leaking or damaged packages.

In the new study, the researchers filtered Capri Sun through filter paper, and then checked whether any microorganisms were left behind on the paper. The juice contained just a few fungal cells, which grew in laboratory dishes.

Dannelly said if this experiment was done on any juice after it was opened and left in the refrigerator, she would expect both fungus and bacteria to grow.

In a second experiment, the researchers, including Leah Horn, an undergraduate biology major, punctured Capri Sun packages with a sterile needle to mimic damage to the product. When left in a sterile environment for three weeks, fungal mats grew in the juice.

A problem with Capri Sun is that the packages are not see-through, so unlike mold on bread or cheese, consumers can't tell when Capri Sun goes bad.

Kraft said it tried creating clear packages for Capri Sun, but stopped making the packages after it created manufacturing problems.

The company said it will not add preservatives to the product because their customers don't want this. Preservatives give food a longer shelf life, but some, such as the preservative nitrite, have been linked to an increased risk of certain cancers.

Dannelly said there are some natural preservatives, such as citric acid, which are not harmful and could be added to the product (although it would make the product more acidic).

"If you're going to have a package you can't see through, I think you need to do something," Dannelly said.

The study has not yet been published in a peer reviewed journal, but the researchers plan to submit the work for publication.

Pass it on: Five types of fungus have been found in Capri Sun, but they are likely not harmful.