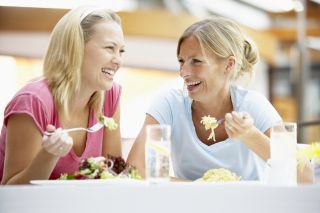 The Atkins Diet has taken our nutritional principles on quite a roller coaster ride in recent years. First, it regained popularity and became the new "it" diet. Then, people seemed to become increasingly concerned with the dangers of too much saturated fat and cholesterol in the diet, and the Atkins' principles fell out of favor. It didn't help that Dr. Atkins himself fell victim to heart failure at least once during his lifetime.

Truthfully, I would never recommend eating a diet rich in saturated fat and cholesterol. But when it comes to protein consumption and health, the matter isn't cut and dry.

A 2012 study in the Journal of the American Medical Association found that although calories play a bigger role in weight gain, protein also plays a part. Researchers split healthy individuals into three groups and added 1,000 calories to their diets, but with varying degrees of protein. Those who ate the least amount of protein gained the least amount of weight, but they also lost muscle mass and stored more than 90 percent of extra calories as fat.

The other two groups, which ate high and normal amounts of protein, experienced equal weight gain, and gained more than the low-protein group. But what stood out about these groups is that instead of losing muscle mass, they gained muscle mass.

It's a confusing issue, to say the least. But this study indicates a few things. Here is a recap:

There is a lot of controversy over the right percentage of protein in a healthy diet. Some believe that we already consume too much. Others believe that there's no such thing as too much.

If you're getting less than 15 percent of your calories from protein, you may want to consider adding a bit more to avoid losing muscle and gaining fat. On the other hand, if you're already consuming protein in the "normal" range but still gaining fat, it's probably best to explore other dietary imbalances.