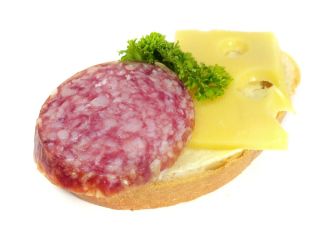 A habit of overeating lean chicken will put as much extra fat on your body as overeating the same number of calories in donuts or butter cookies, a new study says.

Diet studies are notoriously hard to control when the participants are living their everyday lives – we break diet rules or misremember (or lie) about what we eat. So researchers at the Pennington Biomedical Research Center in Baton Rouge, La., found 25 volunteers who agreed to stay in their clinic 24 hours a day, seven days a week, eating only under staff supervision.

For the first few weeks, doctors monitored the volunteers' weights to calculate each person's calorie needs. Then, researchers overfed the volunteers by about 950 calories each day, which meant they got about 140 percent of their actual daily needs, for eight weeks.

Calorie per calorie, "It didn't make any difference how much protein you ate, you gained the same amount of [body] fat," said Dr. George A. Bray, lead author of the study published Tuesday (Jan. 3) in the Journal of the American Medical Association.

Bray said the extra calories eaten during the eight-week study were the equivalent excess of what the typical American eats over 10 years. "It takes about 100 calories a week to replicate the current obesity epidemic," said Bray, who is a professor of medicine at Louisiana State University.

Moreover, although the people in the low-protein group gained fewer total pounds over the course of the study, they weren't exactly healthy. In fact, Bray said the findings raise concerns that the current recommended daily protein intake is too low.

All study participants ate from the same menu, but researchers manipulated proportions of protein and fat to create a high-protein, a normal-protein and a low-protein group. For example, for one lunch, staff served a tuna salad sandwich, but the high-protein group got more tuna and less mayonnaise, and the low-protein group got less tuna and more mayo. Carbohydrates always made up 41 percent of the meals, and neither the volunteers nor the evaluating researchers knew who was in what group.

"Scales don't give you the truth. They only tell you what the weight change was," Bray said. "For protein, 78 grams a day was what was required to keep protein balance before they started to lose lean body mass."

A person's lean body mass consists of their muscle, as well as the weight of organs such as the liver and kidneys, which Bray said, bulk up to help the body metabolize more protein.

On the other hand, too much protein, especially in the forms found in Americans' diets, may not be a good thing, said Diane Dressel, registered dietitian at the Mayo Clinic Health System in Eau Claire, Wis.

"A lot of people have it in their heads that chicken is lean. If it's home-prepared, skinless and grilled, it is," Dressel said. "However, the way chicken is often presented to us — it's breaded, fried or there are sauces on it."

While boneless skinless chicken breast can have 40 calories an ounce, once it's fried and breaded Dressel said the same chicken would add up to 100 calories an ounce – about equivalent to the calorie counts in fatty red meats.

But do the results apply in the real world?

Yet Dr. David Heber, who wrote an editorial accompanying the new study,  said that in the real world where people aren't force-fed extra calories, adding protein to the diet might actually prevent people from gaining fat.

"The study that Bray did was not a real-world study. It was under very controlled conditions, but it's a nice confirmation that protein does increase lean muscle mass" said Heber, director of the UCLA Center for Human Nutrition.

However, Heber has shown in studies that "protein is the most satiating macronutrient." Eat a donut for breakfast, and two hours later people are looking for a snack. But eat eggs or egg whites for breakfast, and people tend to last until lunch before they are hungry again.

"We tend to always focus on one nutrient, but it's always complicated," Heber said.