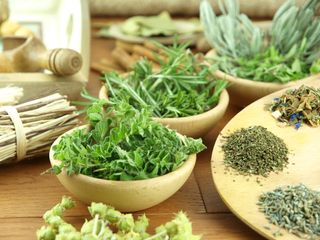 We tend to think of herbs and spices as garnishes to our meals. But are we underestimating their power? I've always thought so. Sure, they add flavor and pizazz to an otherwise boring meal, but they also add vitamins, minerals and antioxidants.

Herbs such as basil, parsley and cilantro have high concentrations of vitamins A and C. Scientists have studied these and other herbs to determine whether they have even more health benefits.

Here are three all-stars you may want to consider eating more often:

The compound curcumin, which is found in turmeric, may help keep diabetes at bay, according to a 2012 study in the journal Diabetes Care. In the study, participants with pre-diabetes took concentrated curcumin tablets, or a placebo, daily for nine months. At the end of the study, 16.4 percent of people who took the placebo had developed Type 2 diabetes, but none of those who took curcumin did.

If you want to get more curcumin in your diet naturally, without the use of supplement pills, try making an Indian dal (a lentil-based dish), or curry. Many Middle Eastern dishes also include turmeric.

According to a 1998 Journal of Essential Oil Research study, the oil in oregano was highly effective in tests against 25 strains of bacteria and one fungal species. A 1997 Cornell University study reported similar findings. Researchers found that oregano was among the best bacteria-killing spices, meaning that it has the ability to kill a wide range of bacteria.

Oregano is a popular ingredient in many recipes including those of the Mediterranean, Middle East and India.

Cilantro is highly effective against Listeria monocytogenes, a dangerous foodborne bacterium, according to a 2002 study in the International Journal of Food Microbiology. Cilantro is definitely an interesting herb. Personally, I love it, but I know many people who can't even stand the smell. It's a "love it or hate it" kind of thing. If you're among those who love cilantro, you may be keeping your gut clear of Listeria, which in rare cases can be fatal.

Cilantro is often found in traditional Mexican dishes, but for a real boost, try making a cilantro pesto.