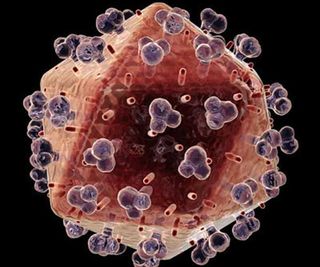 A three-dimensional model of the HIV virus.
(Image: © 3DScience.com)

One reason the human body cannot fight off an HIV infection is because a single protein the virus produces thwarts human defenses, a new study says.

When HIV enters the human body, it produces a protein called vpu that directly combats a critical defense protein of the human immune system, the study showed.

Normally, this immune system protein stops invading viruses from replicating and spreading throughout the body. But vpu disables this defense mechanism, allowing HIV to invade.

When the researchers genetically engineered the virus to lack vpu, human immune system cells could fight back against the virus, the researchers' experiments with cells in lab dishes showed.

"We have effectively identified a new Achilles heel in the arsenal that HIV uses to overcome the defenses present in the body's immune system," said Michael Gale, an immunology professor at the University of Washington in Seattle. "This knowledge can be used to design new HIV antiviral therapeutics.”

Though this discovery only explains the virus’s tricks during the early stages infection, it may help researchers understand how the virus continues to evade the immune system well into infection.

The researchers based the study on their previous research, which showed that early stages of HIV infection impaired the human immune system’s response.

The discovery of proteins in the virus is critical for developing HIV-antiviral drug treatments, because the virus is constantly adapting to become resistant to current medications, Gale said.

Pass it on: Researchers discovered a new protein of HIV that may serve as a target for medication.