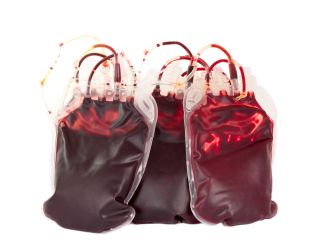 Some obese people may improve their health by donating blood, a preliminary study from Germany suggests.

In the study, obese people with metabolic syndrome who had blood drawn experienced a reduction in blood pressure, along with other changes that linked with a reduced risk of heart disease, the researchers said.

Metabolic syndrome is a collection of symptoms associated with heart disease, including high blood sugar, high blood pressure and low levels of "good" cholesterol. The syndrome has been linked with increased risks of stroke, coronary artery disease and Type 2 diabetes. The main treatment is weight loss.

The findings suggest doctors might consider blood donation as a possible treatment for people with metabolic syndrome who have above-normal iron levels (a common situation), said study researcher Andreas Michalsen, of the Charité-University Medical Centre in Berlin.

However larger trials are needed to confirm the results and evaluate the long-term risks of such a treatment, Michalsen said.

Dr. Pieter Cohen, an assistant professor of medicine at Harvard Medical School and a general internist at Cambridge Health Alliance, said blood donation should not be recommended as a treatment for metabolic syndrome unless more studies are done.

"You want to know [that] it would make them live longer," or reduce the actual risk of heart attack and stroke, not just markers linked with those conditions, Cohen said.

Michalsen and colleagues randomly assigned 64 obese people with metabolic syndrome to have their blood drawn, or to receive no specific treatment. At the beginning of the study, those in the bloodletting group had 10 ounces (300 milliliters) of blood removed, and four weeks later, had another 8.5 to 17 ounces (250 to 500 ml) removed.

In the nontreatment group, blood pressure was reduced, on average, from 144.7 mmHg to 143.8 mmHg.

Blood donation as a therapy?

Reducing the volume of blood through bloodletting would be expected to result in a decrease in blood pressure, Cohen said, but it's not clear if this approach could stabilize blood pressure in these patients,  and the long-term effects need to be studied.

The study researchers did not report whether study participants were taking medications that reduce blood pressure, Cohen said. If patients' blood pressure was not being treated properly to begin with, then the bloodletting may have had a greater effect on this group than it would on others, Cohen said.

The researchers also did not take into account any changes in lifestyle and eating habits that occurred during the study, which may have affected blood pressure.

"There's good stuff in our blood too, that we need to fight infections," Cohen said. "We can't assume that if you take out some bad stuff in a pint of blood, that you're not also taking out some good stuff."

Because metabolic syndrome is not contagious, blood donated from those with the condition would not pose health risks to those receiving it, Michalsen said.

Blood withdrawal is already used a treatment for some conditions, such as hemochromatosis, a condition that occurs when too much iron builds up in the body.

Pass it on: Blood withdrawal may reduce blood pressure in obese people with metabolic syndrome, but it's unclear if this proposed treatment would reduce the risk of conditions such as heart attack and stroke.