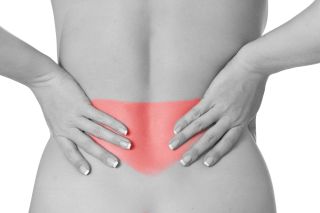 (Image: © Woman's back photo via Shutterstock)

That pleasurable, tingling ache of sexual arousal can quickly turn torturous when it never ends. An unknown number of women suffer from the constant sensations of persistent genital arousal disorder, which has no cure, and no known cause.

"This is the very first connection that's been made between Tarlov cysts and PGAD. Many doctors haven't heard of either condition," said Barry Komisaruk, lead author of the study published May 17 in the Journal of Sexual Medicine.

Komisaruk stumbled upon the connection after a chance conversation with a colleague whose wife suffers from PGAD. Komisaruk's physiology research includes studying brain images of women's arousal, and his colleague made an offhand comment that an MRI of his wife's lower spine revealed Tarlov cysts.

So Komisaruk asked 300 women in a PGAD support group if anyone happened to have an MRI of their lower back. Of the 18 women who sent images, Komisaruk and co-author Dr. Huey-Jen Lee found that 12 women (66 percent) had Tarlov cysts along the base of the spine. Only 9 percent of people in the general population have these fluid-filled cysts, according to the American Association of Neurological Surgeons.

Typically, Tarlov cysts cause symptoms such as pain or abnormal sensations in the lower extremities when they grow beyond 1.5 centimeters in diameter. But the Tarlov cysts found in PGAD sufferers tended to be smaller, around 3 mm in some cases.

Alexandra Milspaw, executive director for the Institute of Women and Pain in Bethlehem, Pa., works with women who have PGAD. While she had not heard of Tarlov cysts as a cause, she said she suspects the condition is similar to errant nerve firings that can produce pain.

"In any type of sexual arousal disorder — whether it's hyperactive or hypoactive — usually what we find is that there's some history of pain or discomfort related to sex or intercourse," Milspaw said. "Or it could have started from a series of traumatic or athletic accidents."

If Tarlov cysts prove to be the cause behind some cases, surgery to remove them could provide permanent relief, Komisaruk said.

However, a neuropsychiatrist in the Netherlands who specializes in unwanted sexual arousal and frequently looks at MRIs of his patients said he suspects Tarlov cysts are not the cause.

Dr. Marcel Waldinger, a professor of sexual psychopharmacology at the University of Utrecht, said he thinks the high number of Tarlov cysts in Komisaruk's study could be a fluke, and therefore won't explain the majority of PGAD cases.

"It would have been an explanation, but we would have seen it in the majority of [my] cases," Waldinger said. The percentage of his patients with Tarlov cysts mirrors that of the general population, he said.

Instead, Waldinger said that damage to the dorsal nerve within the clitoris could be to blame for "these mysterious complaints of this orgasmic feeling."

Despite their disagreement, Waldinger and Komisaruk both support the idea for a follow-up study: numb the nerves that lead from the spine to the genitals and see if it provides relief temporarily.

"I say 'temporarily' because these poor women have the symptoms all the time," Komisaruk said.

Pass it on: An unusual condition in which women are always sexually aroused may be caused by nerve cysts.