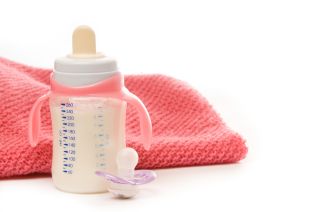 Baby formula someday may include the ingredient of mucus, to help protect babies against viral infections, researchers say.

Unlike breast milk, baby formula lacks elements of the mother's immune system that protect the baby against disease. This may be one reason mothers hesitate to switch to baby formula, said Katharina Ribbeck, a biological engineer at the Massachusetts Institute of Technology.

"It would be great if we could improve the quality and add those missing components," Ribbeck said.

In their recent study, Ribbeck and colleagues showed that mucins, which are the proteins that are the main component of mucus, protected cells against infection by human papillomavirus(HPV), influenza A (a type of flu virus) and Merkel cell polyomavirus (a virus that can cause skin cancer).

Although the researchers tested only these three viruses, they suspect mucins protect against infection by other types of viruses.

The findings suggest mucins might be added to a variety of products, from hygiene products to baby formula, as an antiviral supplement, the researchers said. Mucins are already added to some products, but not for their antiviral properties; for example, they are added to certain moisturizers for their moisturizing properties.

However, obstacles remain. The study was conducted on human cells in a dish, so more work would be needed to show the same thing would happen in the human body.

In addition, the mucins used in the study were collected from pigs' stomachs. Some people may not be comfortable with the idea of consuming an animal product, Ribbeck said.

In the future, researchers may find a way to mass-produce synthetic mucins, Ribbeck said, something she and her team are investigating. She noted that in the case of insulin, a synthetic version was created after the first studies used a version isolated from pigs.

Mucus, which coats wet surfaces of the body, is a natural barrier against pathogens, Ribbeck said. But rather than simply functioning as a passive roadblock, mucins appear to play an active role in the body's immune system, Ribbeck said.

In the study, Ribbeck and colleagues coated cells with a gel of mucins before exposing the cells to the three viruses. The viruses became trapped in the gel and did not infect the cells, likely because of the action of the mucins. It could be that viruses bind to sugar molecules on the mucins, which are similar to the molecules the viruses normally attach to on host cells, Ribbeck said.

The study was funded by the National Institutes of Health and appeared April 4 in the journal Biomacromolecules.

Pass it on: Components of mucus may be able to boost the healthfulness of baby formula and other products, but more work must first be done.