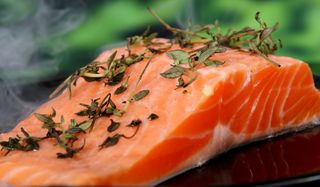 Your brain may look and act "older" than it really is if your diet is low in omega-3 fatty acids, a new study suggests. The nutrient is often found in fish.

Researchers found that people with low omega-3 fatty acid levels had smaller brains, and did worse on tests of memory and thinking skills, compared with people who had higher omega-3 levels.

"There have been several studies that have shown that omega is beneficial to the heart," said study co-author Dr. Zaldy Tan, a geriatrician at the University of California, Los Angeles. "It may be beneficial to brain health as well."

The study is published today (Feb. 27) in the journal Neurology.

As we age, our brains get smaller, and previous studies have linked brain shrinkage with declines in mental functioning, dementia and Alzheimer's disease.

According to the American Heart Association, omega-3 fatty acids boost heart health, reducing the risk of dying of cardiovascular disease. The association recommends eating small portions of oily fish twice a week (oily fish are those that contain about 15 percent healthy fat, such as salmon, mackerel, herring and sardines). Additionally, the group advises that people with coronaryheart disease eat fish daily, or talk to a doctor about adding omega-3 to their diet.

Although the study shows a link between lower levels of omega-3 and smaller brains, Tan said "it's premature to recommend that people take omega-3 just for brain health."

He said that improving vascular health by lowering blood pressure and decreasing inflammation could be one potential mechanism than explains the link, but "nobody knows for sure yet."

Vascular disease may be linked with dementia

In the new study, researchers looked at MRI brain scans of nearly 1,600 middle-aged adults with no history of dementia. Participants were part of the ongoing Framingham Offspring Study, which began in 1971.

They were given tests that measured mental function, brain volume andomega-3 fatty acid levels in their red blood cells.

They found that people whose DHA levels were among the bottom 25 percent of the participants had smaller brains compared with people who had higher DHA levels.

They also found people whose levels of all omega-3 fatty acids were in the bottom 25 percent scored lower on tests for mental function, such as problem-solving, multitasking and abstract thinking.

"Based on this study, we see the effect fatty acids have on the brain," said Dr. Mary Quiceno, a neurologist at the University of Texas Southwestern Medical Center, who was not involved with the study.

"[Scientists] think there is a relationship between vascular disease and dementia," Quiceno said. "Vascular disease may hasten or promote the onset of Alzheimer disease."

For people who don’t have dementia, Quiceno said she recommends following a diet that advocates consuming more fatty acids.

"I would suggest following a Mediterranean-style diet," she said. "The diet has been shown to lower rates of mental decline, plus there's less red meat, and more fish and olive oil, for the fat."

Pass it on: Low omega-3 levels are linked with a smaller brain and a decline in mental functioning.