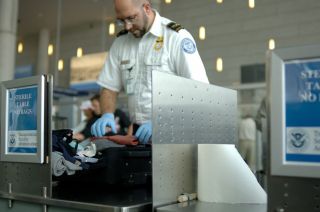 The Transportation Security Administration (TSA) is looking to monitor the levels of radiation that its employees are exposed to from X-ray technology, including airport body scanners, a document from the agency says.

In the document, the TSA said it plans to start performing radiation measurements using "personal dosimeters," which are devices worn on the body that measure a person's exposure to radiation, at certain airports. Such devices are used by people who work near sources of radiation  such as hospital and nuclear power plant employees.

"The measurements will assist the TSA in determining if the Transportation Security Officers (TSO) at selected federalized airports are exposed to ionizing radiation above minimum detectable levels, and whether any measured radiation doses approach or exceed the threshold where personnel dosimetry monitoring is required by [Department of Homeland Security]/TSA policy," according to the document, which was posted on a government website.

The purpose of the document, called "request for information," is to identify and collect information on vendors that could supply personal dosimeters to the TSA.

Personal dosimeters measure exactly how much radiation a person receives, so the levels can be compared with the limits set by the government.

Experts today expressed surprise that such devices, which are required by law for anyone who works with radiation, were not already used by airport screeners.

"I wouldn’t dream of them not having that already," said Dr. Nagy Elsayyad, a radiation oncologist at the University of Miami Miller School of Medicine. "They really should have some form of monitoring device," Elsayyad said.

"By any possible definition, they are radiation workers," said David Brenner, director of the Center for Radiological Research at Columbia University Medical Center in New York.

Some of the airport body scanners, known as backscatter scanners, emit X-rays which bounce off the body to create an image. There are about 250 such scanners in use in the United States.

McCarthy said all studies done to date on airport scanners suggest the amount of radiation they emit is well within national safety standards. The scanners are also tested at least once a year to check radiation emissions.

Even though the radiation doses are likely to be very low, Elsayyad said the doses should still be confirmed using dosimeters. Because dosimeters are fairly inexpensive (equating a few dollars per month per person), the TSA has nothing to lose, and a lot to gain, from providing its employees with dosimeters, Elsayyad said.

By not already measuring the radiation airport screeners receive, the TSA is indicating it considers its employees to have about the same exposure to radiation as the general public, "which I don’t think is true," Elsayyad said. While a passenger will likely go through the scanners just once in a day, "these guys are sitting there all the time," Elsayyad said.

The actual levels of radiation exposure to airport security workers should be investigated, he said. Elsayyad said the plan to start using personal dosimeters should be commended.

The body scanners emit about 0.15 microsieverts of radiation per scan. This dose is equivalent to the radiation a person would be exposed to in two minutes of flying in an airplane, the TSA said.

The health effects of such small radiation doses are still uncertain. "We're sort of in this very large gray area," said Dr. Jacqueline Williams, a radiation expert at the University of Rochester in New York. Though Williams said in a previous interview the effects to an individual passenger are likely negligible .

Even collecting information on how much radiation airport screeners are exposed to still won't tell us whether they may suffer health consequences, Williams said. However, she agreed that personal dosimeters for airport screeners should still be used, adding the TSA should know exactly what doses of radiation are involved.

Pass it on: Airport security screeners may start wearing devices to monitor their exposure to radiation.