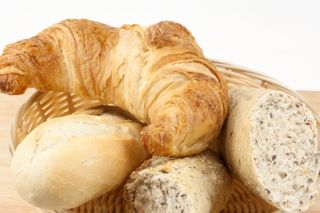 Gluten and icebergs have a lot in common. They don't factor into the daily plans of most people, but for others, such as sufferers of celiac disease and captains of ocean liners, it's necessary to avoid them at all costs. Also, like an iceberg, there is more to gluten than is visible at the surface.

Gluten is a protein found in wheat, barley and rye, and it's the only known protein found in our food that is completely indigestible. Moreover, its indestructible molecules can slip through the intestinal lining, and in some people, attract the attention of the immune system, which mistakes it for an infectious threat.

If the immune system locks onto gluten as an enemy, every time it enters the body, the immune system does whatever it takes to get rid of it, including killing intestinal cells. The result, celiac disease, causes severe gastrointestinal symptoms that can be avoided only by cutting gluten out of the diet completely.

Doctors use a reliable battery of tests to diagnose celiac disease, but gluten sensitivity, which is loosely defined as any non-celiac gluten-related health problem, is harder to pin down. In fact, the question of whether gluten sensitivity is even a legitimate medical condition is controversial, although a study published earlier this year in the journal BMC medicine laid to rest some skepticism by demonstrating the immune system's involvement in the condition.

Dr. Alesio Fasano, lead author of that study and director of the Center for Celiac Research at the University of Maryland School of Medicine, said that although a consensus has yet to be achieved on gluten sensitivity, its existence "seems to be more and more matter of fact."

People of any age can suddenly develop celiac disease or gluten sensitivity. Scientists don't know precisely how this happens, but certain genes make it more likely. Because bacteria in the digestive tract may wield an outsized influence over the activity of these genes, Fasano said, it's possible that bacterial turnover in the gut might trigger the onset of celiac disease and gluten sensitivity.

The role of gut bacteria may also factor into why rates of celiac disease have climbed sharply in recent years, an increase beyond what can be explained by heightened public awareness of the disease.

"We're cleaner than we used to be," Fasano said, and our general cleanliness may lead to overactive immune systems and a less stable environment for healthy gut bacteria. Additionally, celiac disease may be on the rise because we eat more wheat products now than our ancestors did, and that wheat contains more gluten.

But not every customer in the gluten-free aisle approaches it out of medical necessity. "It's fashionable to go on a gluten-free diet," Fasano said. "A gluten-free diet will force you to avoid junk food," he said, but there's been little evidence for or against other purported health benefits.

One idea, that a gluten-free diet enhances athletic endurance by removing digestive stress, "has been embraced by professional athletes," Fasano said, but "the jury is still out."

"One thing a gluten-free diet does not do is make you lose weight," he added.

Anecdotal reports have also linked gluten to schizophrenia and autism spectrum disorders (ASD). "This is one of the most controversial fields of the gluten sensitivity business," Fasano said.

Pass it on: Gluten is a cause for concern for people with celiac disease and gluten sensitivity.