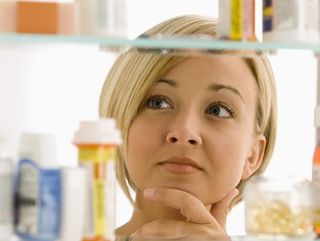 For many of us, those miniature closets we call medicine cabinets can barely contain today's super-size bottles of pills and potions. But the daunting task of organizing them isn’t optional, experts say, because a spillover of supplies is the last thing we'd want to encounter in a crisis.

Ironically, one thing that should never be stored in a medicine cabinet is medication – either prescription strength or over-the-counter, said Keith Hodges, an executive committee member of the National Community Pharmacists Association.

"That's actually the worst place to store it," because the heat and moisture in bathrooms tend to degrade it, said Hodges, who is also an independent pharmacist in Gloucester, Va.

What about the rest of the mess? "You want to have what you use most frequently in the easiest location," said Angela F. Wallace, president of the National Association of Professional Organizers and a certified professional organizer from Novato, Calif. "But most modern medicine cabinets are not nearly big enough, and if you're sharing with a spouse ... there's no way it’s all going to fit." Therefore, organizing a medicine chest typically means developing a storage system for medications, vitamins and other supplies that includes not just the cabinet itself, but also nearby drawers and closets, Wallace said. Products that don't fit in the medicine cabinet, such as large bottles of lotion, can be stored in baskets or boxes below the sink vanity or in a linen closet, she said. The smaller items should be placed back in the cabinet according to how often they're used — those used frequently on lower shelves and those used only sporadically on upper ones. Paring Down Hodges recommended emptying all supplies onto a table twice a year — perhaps when the clocks change in spring and fall — and assessing what actually gets used and whether items have passed their expiration dates. Wallace employs what she calls the 80-20 rule. "Eighty percent of what's in the medicine cabinet, you probably don't use," she said. "Ask yourself: Do you really need it?" What items should make the cut? Much depends on the age and gender of those living in the home, Hodges and others said. But essential medicine cabinet staples include:

Benadryl, for allergic reactions, and cough syrup should also be kept in the house, but in a cooler, dryer location, Hodges said. Other useful-but-optional items include:

Prescription medications that are expired or no longer used should be taken to your local pharmacist for proper disposal, Hodges said, and those remaining should be stored in a locked container not accessible to outsiders. "Lots of medication is stolen from the home ... it's a huge problem," Hodges said.  For example, teenage drug abusers often lift pills from friends' or relatives' medicine cabinets to support their habit. An appealing byproduct of an organized medicine chest may be a slightly thicker wallet, Wallace noted. "Even in the short run, you're saving money because these types of health care products are not inexpensive," she said. "It also saves stress because you know exactly where to find everything." Pass it on: Medicine cabinets should be organized by how frequently items are used.