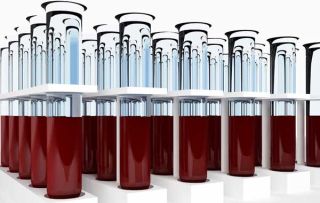 Moms-to-be may soon have a method of detecting Down syndrome before birth, thanks to a new genetic test that could be safer, faster and more cost-effective than existing techniques.

The new method relies on fetal DNA taken from the mother's blood, rather than from fluids and tissue surrounding the fetus, said study researcher Philippos Patsalis, a geneticist at the Cyprus Institute of Neurology and Genetics in Nicosia.

Down syndrome, a common cause of mental retardation, results from having an extra copy of chromosome 21. Most prenatal tests for this condition increase the chance of miscarriage because they require physicians to insert a needle into the uterus to extract amniotic fluid, placental tissue or blood from the umbilical cord. Pregnant women usually skip such testing unless a high risk for the condition is indicated by an ultrasound or maternal blood tests that measure protein and hormone levels.

Less than 6 percent of DNA in the mother's blood belongs to the fetus, so the major challenge for Patsalis and his team was to collect enough fetal material. They isolated, multiplied and measured the fetal DNA.

Because fetuses with an extra copy of chromosome 21 have more genetic material than fetuses without Down syndrome, the researchers correctly predicted the presence of Down syndrome in 34 out of 80 in-utero cases.

The method doesn't rely on special equipment or complex software, so it could be used in labs around the world, Patsalis told MyHealthNewsDaily.

"It's astonishingly simple," said Sinuhe Hahn, who evaluates noninvasive strategies for prenatal diagnosis at the University Hospital Basel in Switzerland and wasn't involved in the study. The procedure is easier, cheaper and faster than other noninvasive approaches, such as next-generation gene sequencing, which depends on expensive machines that aren't universally available, he said.

However, Hahn said, "this is a very preliminary study," and the researchers should confirm the reliability of the method in a more extensive investigation.

A large clinical trial is already in the works, and Patsalis said he anticipates the strategy will reach clinics within two years. He's also doing studies to determine whether the method could detect other genetic conditions .

"We'll have, in the near future, an application that will help many pregnant women to have a much safer prenatal diagnosis," Patsalis said.

The study was published online on March 6 in the journal Nature Medicine.