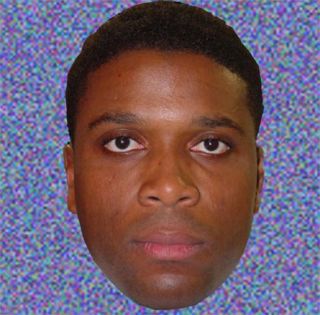 This face image of a young, clean-cut, black man with a neutral expression is very similar to those used in the experiments.
(Image: © Elizabeth Phelps.)

New research shows that we have a hard time letting go of fears associated with members of a different race.? This apparent predisposition was reduced in those who had been involved in interracial dating.

The basic experiment paired mild electric shocks with pictures of male faces, as well as various animals.? When the shocks were removed, the subjects continued to react fearfully to the faces of a different race.

"What was most surprising for me was that the responses were equal for black and white participants," said Elizabeth Phelps from New York University.? "In our culture, we have certain stereotypes, which might make you expect a white person to hold onto negative associations with black males.? But black persons had a similar reaction toward white males."?

Phelps and her colleagues measured a fear response by increased sweating in their adult subjects.? As previous experiments have shown, images of snakes and spiders elicited a response even after the shocks stopped, while the negative emotional reaction to birds and butterflies quickly subsided.?

This bias toward different animals is thought to be inherent as opposed to learned.? Humans who were born wary of snakes and spiders had a better chance to survive.? An evolutionary basis is supported by other research with primates.? Lab monkeys, who had never seen a real snake in their life, showed persistent fear of a toy snake, but not a toy bunny.??

When the subjects were presented images of unfamiliar black and white men with neutral facial expressions, the fear response lingered only for those images of the racial outgroup, as depicted by a man from a different race than the subject.

"The pattern of response was essentially identical for the classical cases of snakes and spiders as for the racial outgroups," Phelps told LiveScience.

The tendency to hold onto these racial fears may influence how we think.? We may more readily remember negative information about the other race, and it will be harder to change our initial impressions.

Although the subjects showed as strong a prejudice towards a different race as towards dangerous animals, the researchers argue that adaptation probably had little to do with the racial case.

"We didn't evolve around different races," Phelps said.? "So it is unlikely that race, per se, is driving this effect."?

The emergence of separate races happened relatively recently - by some estimates, between 100,000 and 200,000 years ago.?? Geographic isolation is thought to have been necessary, so early humans would have had little interaction with other races.? There would have been no reason to acquire an inherent racial suspicion.

Therefore, the responses in the lab are - at least partly - culturally influenced.? To examine this, the researchers interviewed the subjects to assess their conscious, as well as unconscious, racial attitudes. They also asked them what percentage of their acquaintances, friends, and romantic partners were of a different race.

It turned out that the only factor that had any correlation with the fear responses was the amount of interracial dating.? Those subjects who had more contact with the opposite race through dating exhibited less of the fear bias towards the outgroup.

It is impossible to say from these results whether those who have experienced interracial dating start out with less of a fearful predisposition, or whether they learn to be less fearful of the other race through the close contact.

The researchers speculate that humans are born with a suspicion of those outside their group - be they from another tribe, another neighborhood, or another race.? The way in which we define our group will depend on the culture we grow up in. "In America, race is one of the more prominent ways," Phelps said.

Those who date another race may change their perception of what their group is.

"Our discovery underscores the strong bond between person and social group," said Mahzarin Banaji from Harvard University. "It shows how strong is the 'pull' that the groups we belong to exert on us. We can't shake off the group easily."

Even people who are well-intentioned may have a deep-seated suspicion of outsiders. Being aware of the "pull" could help avoid whatever subtle influences on behavior this may have.?

"The optimistic news is that this predisposition to fear members of another race may be changed by close personal contact," Banaji said.? "We are products of our evolutionary history and our immediate social environment; the former we don't control, the latter we most certainly do."

These results are presented in the July 29 issue of the journal Science.