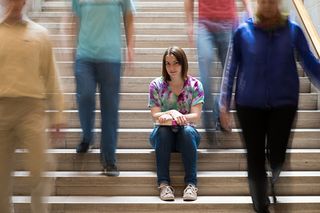 The ability to filter out motion in the background is an important perceptual tool
(Image: © J. Adam Fenster | University of Rochester)

A simple visual test is surprisingly accurate at predicting IQ, according to new research.

The study, published today (May 23) in the journal Current Biology, found that people's ability to efficiently filter out visual information in the background and focus on the foreground is strongly linked to IQ. The findings could help scientists identify the brain processes responsible for intelligence.

Since the 1800s, the forefathers of IQ testing, including Sir Francis Galton (who also pioneered the science of fingerprinting), suspected that highly intelligent people also have supersensory discrimination.

But studies in the subsequent decades have found only a modest connection between IQ-test scores and people’s ability to quickly or accurately spot motion in images.

Tadin and his colleagues were studying a separate question on visual perception in 12 participants when they found something striking: IQ seemed to be correlated strongly with performance on a visual task.

The test asked users to spot the direction of motion on a series of black-and-white stripes on a screen. Sometimes, the lines formed inside a small central circle, and other times, they were large stripes that took up the entire screen. Participants also completed a short IQ test. [Watch Video of Motion and Test Your Smarts]

Because they had looked at so few people, Tadin and his colleagues wondered if their results were a fluke. They repeated the experiment with 53 people, who also took a full IQ test.

The ability to visually filter the motion strongly predicted IQ — in fact, motion suppression (the ability to focus on the action and ignore background movements) was as predictive of total IQ as individual subsections of the IQ test itself.

As people walk, the background scenery is always changing, so efficient brains may be better at filtering out this irrelevant visual information. And that efficiency could be operating across a wide range of tasks, Tadin said.

"What happens in brains of high-IQ people is, they're automatically processing motion of small moving objects efficiently, whereas they're suppressing the background," Tadin said.

The findings reshape the conventional view that quick thinking leads to smarts.

"Speedy processing does matter, but it's only half the story. It's how you filter out things that are less relevant and focus your speedy resources on what is important," Tadin said.

The study reveals new insights into brain efficiency and smarts, said Kevin McGrew, director of the Institute for Applied Psychometrics and owner of www.themindhub.com.

Even though the link between IQ and visual filtering was very strong, IQ tests won't be replaced by motion tracking anytime soon, said McGrew, who was not involved in the study.

"Their task accounts for or explains about 50 percent of the IQ scores," McGrew told LiveScience. "That is impressive in psychology, but it still means there is 50 percent of the scores that they're not explaining."