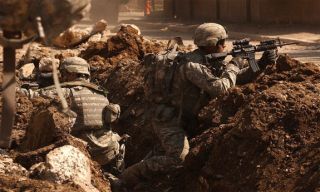 The drug mefloquine may damage the brain stem and increase the firing of neurons, said Dr. Remington Nevin, a former Army physician and researcher at the Johns Hopkins University in Maryland. Nevin discussed his research Monday (May 20) here at the annual meeting of the American Psychiatric Association.

For decades, soldiers deployed to regions where malaria is common, such as Iraq or Afghanistan, have been given drugs aimed at preventing the mosquito-borne disease, one of which is mefloquine. But the Army stopped recommending the routine use of mefloquine as the preferred anti-malaria drug in 2009, according to the Army Times.

Mefloquine may lead to anxiety, paranoia and hallucinations that can be misdiagnosed as other ailments, such as post-traumatic stress disorder or traumatic brain injury, Nevin said.

"The symptoms can overlap," Nevin told LiveScience. "It's very easy in military veterans to confuse the two conditions, or to mistakenly diagnose traumatic injury."

A long history of side effects

Nevin became curious when he was deployed to Afghanistan in 2007 and heard stories about the drug's side effects.

Animal studies have linked mefloquine to lesions in the brain stem, a brain region which plays a role in PTSD. Other studies tied the drug to damage in the part of the brain that helps people with their sense of balance, which could explain why the drug causes dizziness. And still other research indicated that the drug could damage the amygdala and the hippocampus, which control stress response.

Further research revealed that mefloquine seemed to cause some of the same symptoms, such as nightmares and hallucinations, as related drugs that the military tested in the years after World War II, but scrapped for being too dangerous.

And although the military indicated that severe side effects were rare, the literature seemed to suggest they occurred much more frequently, Nevin said.

In 2012, a study from the Centers for Disease Control and Prevention suggested that symptoms caused by the drug such as dizziness, anxiety, paranoia, nightmares, cognitive difficulties and trouble focusing could be mistaken for, or worsen, PTSD and traumatic brain injury.

Though it's not clear how mefloquine causes these effects, one explanation is that it causes overfiring of brain cells in the brain stem.

There may now be thousands of people who received diagnoses of brain injury or PTSD whose symptoms may be caused in part by medicine they took while deployed, Nevin said. As a result, the treatments they receive may not necessarily help them.

To determine how big this problem is, the research community needs to do brain scans, animal studies and other experiments to isolate mefloquine's effects. Scientists should also do more systematic studies in affected populations, such as veterans and Peace Corps volunteers.

Better understanding how mefloquine affects the brain could point the way to potential treatments, Nevin said.

"If we spend only a fraction of what was spent on the development of this drug to investigate its toxic effects, we could make great advances," Nevin said.