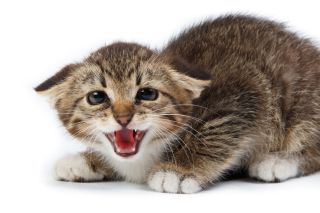 Most cat owners can attest that taking kitty for a car ride isn't much fun.

Cats, unlike dogs, just don't seem to enjoy the experience. And while it's impossible to say exactly why your beloved feline pet detests the back seat, some common characteristics of cats can help explain their fear of four-wheeled locomotion.

Cats are creatures of habit. Their love of routine is part of their ancestry. Today's domestic cat is believed to have descended from a small, Middle Eastern wildcat, Felis silvestris lybica, a solitary and highly territorial feline for whom daily routines — like marking territory and burying feces — are a matter of survival.

Your cat's loathing of car rides could just be an instinctual response to a change in its daily rituals. Cats, like many people, get stressed in unfamiliar or uncomfortable situations.

Furthermore, taking kitty off her home turf might not seem like such a big deal to you, a globe-trotting human, but for a creature that spends a good deal of time maintaining its territorial boundaries, crossing into the outside world can be scary.

And while some cats do genuinely suffer from motion sickness, others who vomit or become incontinent when riding in a car might simply be nervous. Such psychogenic symptoms are not uncommon among car-phobic felines.

Experts say that keeping calm yourself can go a long way toward making your pet feel more relaxed in a stressful situation. You might also try having someone else do the driving while you sit in the back and talk to kitty. Distraction is key for alleviating a troubled pet's fears.