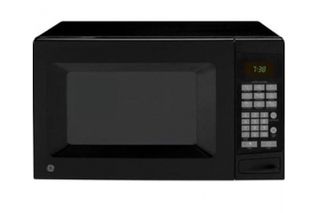 Though it looks benign, your microwave oven can be dangerous if used incorrectly.
(Image: © GE)

If you're looking to inject a little spark into a boring afternoon, trust us: Putting strange things in your microwave oven is not a good idea. Unless you're on "MythBusters." Or "Jackass." So please, kids — don't try these at home.

In 2003, a man in Perth, Australia, tried to recharge his mobile phone battery by cooking it in a microwave oven, according to the Mercury newspaper. The result? An explosion, firefighters rushing to the scene and hundreds of dollars in fire damage, namely to the microwave.

A reader of the Daily Telegraph — probably obsessed with safe electronic data disposal — once asked if he could put his CD in the microwave. The Telegraph said no: "It can ... cause arcing inside the oven, which may damage it or shorten its life. It could also release toxic gasses, which you really wouldn't want anywhere near your food."

The heat from a lit match or wooden toothpick becomes so intense that it begins to turn into a plasma, or ionized gas, according to at least one online video. Observe that this fellow is in full body protection and still beats a hasty retreat shortly after setting the toothpick alight.

When electric fields in the microwave flow through the thin metal foil, according to HowStuffWorks, the foil quickly gets "overwhelmed" and heats up rapidly. The crinkly edges will sputter sparks. Next, you could have a full-blown blaze on your hands.

Heating up a light bulb

Videos on Science Geek Girl's website show a pulsating glow emanating from light bulbs in a microwave. Author Stephanie Chasteen, a physicist and an educator, explains that the microwave creates a current in the metal of the bulb, which lights up the filament. Meanwhile, the argon gas surrounding the filament glows purple because the microwave is at a high voltage and creates a plasma. But a light bulb also contains some metal, so once again: Don't try this at home, kids.