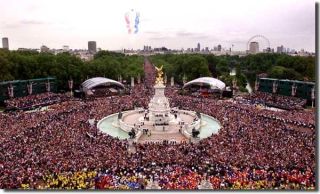 The title of science fiction author John Brunner’s magnum opus, “Stand on Zanzibar,” plays off the idea that the Earth’s 1950 population of 2.5 billion could fit, standing shoulder-to-shoulder, on the Isle of Wight, in the English Channel. Brunner, who predicted that unbridled population growth would drive that figure to 7 billion by 2010 (he was off by a year — the population reached 7 billion around Halloween, 2011), wryly noted that we would need a bigger island — hence, Zanzibar.

The global population squeezed onto a single island might strike you as a recipe for the worst mosh pit in history, but that was Brunner’s point. Let’s face it, 7 billion sounds like an awful lot of people being supported by this cosmic island called Earth, particularly considering that the global population stood at only 3 billion in 1960 and at around 300 million — roughly the current U.S. population — some 2,000 years ago. [7 Billion People? Big Population Facts]

Around the year 1000, the population growth rate held steady at only 0.1 percent, a trickle decimated by the Black Plague in the 1300s. It took the Industrial Revolution to kick population growth into truly high gear: The 1800s saw the world finally break the 1 billion mark. As of 2010, around 20 cities globally held populations topping 10 million; to put that number in perspective, the entire population of Earth during the hunting and gathering period of prehistory could fit in one such city.

Bearing all of this in mind, we can be forgiven for believing, at least intuitively, that the living outnumber the dead. Indeed, this notion has floated around since the 1970s, when the world population amounted to half of today’s number. But the idea doesn’t bear up under scrutiny. The reason? Too much time. Modern humans, aka Homo sapiens, came into existence over 200,000 years ago. Even assuming a more conservative span of time, say 50,000 years, and taking into account poor growth rates, the dead still win by a landslide.

Well, not literally a landslide; that would be disgusting.

Carl Haub, a Population Reference Bureau demographer, calculated in 2002 that the minimum number of people ever to have lived tallied to just over 106 billion. Others have bracketed the number at 45 to 125 billion.

That’s a lot of islands.

Given that the most aggressive future growth estimates top out at around 10 billion, it is unlikely that this myth will ever become a reality unless, perhaps, we colonize space. Even then, it would come down to a question of time and growth rates.