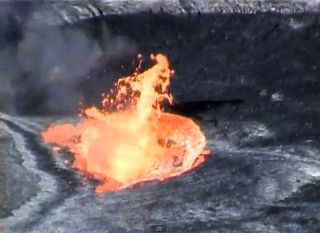 Fountaining activity on the surface of a lava lake.
(Image: © YouTube | Photovolcanica)

What would happen if you leaned a bit too far over the rim of a volcano and fell in? You would die, of course — but how?

The question has garnered more scientific investigation than you might expect. As reported in December, lava's high density and resistance to flow suggest a person would smack onto the surface of a lava pit rather than sinking into it.

So, instead of dying like Gollum, who dove into a bubbling volcano in the book and film "Lord of the Rings: Return of the King," a simple physics analysis indicates you would stay buoyed on top. This wouldn't save you from a gruesome fate, however: Resting on a bed of molten rock four times hotter than the broiler in an oven, you'd quickly burst into flames and burn to death.

But a newly surfaced video shows that a fallen person might, in fact, be able to penetrate the surface of a lava pit via inroads made by the gases given off by his or her burning flesh. [Smart Answers to Crazy Hypothetical Questions]

In 2002, the Germany-based volcano researcher Richard Roscoe filmed a 66 pound (30 kilogram) bag of leftover food and other organic matter being thrown into the lava lake of Ethiopia's Erta Ale Volcano. The bag of waste fell 260 feet (80 meters) before striking the surface — and, as seen in the video, it ended up making a dent. As the bag burned, it caused violent outbursts of lava in an effect known as fountaining.

"It is frequently discussed whether it is possible to sink in lava. Due to its high density, a person would generally be expected to remain on the surface," Roscoe wrote in a video description on YouTube, where he recently posted the footage. "Indeed it is possible to briefly walk on certain types of lava if professional heat-protective clothing is worn (do not try yourself). However, the video shows that falling from a height, a person would be able to penetrate the crust of the lake and submerge in it."

Roscoe suggested the lava's fountaining activity may have been induced by steam produced by the organic matter as it burned.