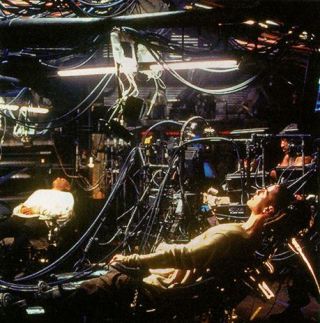 School of the future? Humans hack into "The Matrix," a link-up that allows them to rapidly acquire complex skills and training.
(Image: © Warner Bros. Pictures)

"I know kung fu." It's one of the most memorable lines from the 1999 film "The Matrix." Keanu Reeves' character, Neo, utters it after the martial art is "uploaded" to his brain in mere seconds via a futuristic computer jacked into his skull.

If only it were that easy. Nowadays mastering a style of kung fu takes thousands of hours of practice. But there are some emerging hints that the pace of learning a skill can be technologically boosted. Perhaps someday, with major advances in several fields, the acquisition of knowledge and skill could happen at broadband-like speeds across surgically implanted and external hardware.

"The concept is not totally implausible," said Bruce McNaughton, a neuroscientist at the University of Lethbridge in Canada. "I suggest that you check back in a couple of hundred years."

Learning is a tedious process – ask any calculus student, or athlete training for the Olympics. Repetition of a task, whether solving math problems or pole-vaulting, gradually instills long-term mental and muscle memory.

A study published late last year suggests how this learning process might be amplified, and without the learner even being aware of it. The name of the technique even has a nice sci-fi/technobabble ring: scientists call it "decoded neurofeedback."

Using a brain scanner, researchers observed the patterns of activity in subjects' visual cortexes as the subjects looked at orientations of a particular object. During hourlong sessions over several days, the subjects performed a separate mental task – concentrating on a green disk to make it grow bigger – that the researchers had pegged to the pattern for one of the orientations. Over time, the subjects got better at identifying that particular orientation of the object, without knowing they'd been trained to do so. In short, they learned. [6 Fun Ways to Sharpen Your Memory]

This sort of indirect, subliminal learning could eventually translate into teaching someone how to, say, play piano or do a judo chop.

"It's not like 'The Matrix' yet," said Takeo Watanabe, a professor of neuroscience at Boston University and lead author of the decoded-neurofeedback study. "But this can be developed to be a very strong tool which could realize some aspects of what was shown in the movie."

From visualizing to actualizing

For now, the technique has been attempted only for perceptual learning (specifically, visual learning). Applying it to motor learning – the coordinated movements of limbs, balance and breathing that is kung fu, for example – would be a major challenge.

"Motor learning is similar to perceptual learning, so we are almost sure it can be applied to motor learning," Watanabe said. "But motor learning requires an improvement in a sequence of motions, so it may take a lot of time."

Watanabe continued: "Maybe it is possible to make the subject learn to make one movement better than before within one year or so using this technology." [Top 10 Inventions that Changed the World]

Although that's a glacial pace next to Neo's acquisition of kung fu, Watanabe's technique does offer a key advantage. "In 'The Matrix,' the information and skills are directly transferred into the brain physically," he said. "Our method is better in that we don't have to hurt the human's brain." In other words, the technique doesn't require a giant data jack in the back of a person's head.

Neo and his fellows have various ports in their bodies for feeding tubes and other sensory-input cords. Most important is the large socket at the back of the skull that connects Neo to the learning machine. Thus "plugged in," he can learn new abilities to wield as he participates in the virtual reality computer program of the Matrix itself.

Medical science offers similar, if far less advanced, devices today, called brain/machine interfaces or brain/computer interfaces. These experimental setups have permitted paralyzed people to manipulate a robotic arm using thought alone. An implant in the subject's brain registers the electrical activity of neurons, which is then translated into movement of the mechanical arm.

Continued development of these systems should greatly aid in rehabilitation. "It will be possible to crudely manipulate the brain in the next few decades, and even to do things like restore crude visual sensations to the blind or to read crude control signals for prosthetic limbs," said McNaughton. "Things of this nature are already being done."

The input and output in these setups, however, falls well short of the actual "programming" of information into the brain as seen in "The Matrix." To pull off something like that, scientists would need a far greater understanding of the physical basis of memory and thought.

The brain has roughly 100 billion neurons, which are connected by trillions of neuronal junctions called synapses. Memory, at least in part, is physically "written" into the shifting interconnections of neurons and possibly the neural architectures themselves. Rewiring a brain's cells to form new memories would require exquisite precision on extremely small scales.

"It is in principle possible to record from a few brain cells and to stimulate them, and thus in some sense perturb the system," said McNaughton. "But with present- day technology, the concepts you are talking about would require massive invasive intervention in the brain, causing severe damage, and the implant would be rejected [by the body's immune system] in any case."

Assuming drugs or devices with bio-friendly coatings can stave off immune system attacks, and that the implants can interface with external hardware to selectively alter neurons on the molecular scale, another fundamental issue arises: whether everyone's brain "speaks" the same language.

Researchers have been working for decades on deciphering the brain's "neural code." The brain activity patterns of learning, reasoning and stored memories may differ significantly between individuals. In that case, people's brains would not act like standardized computers that can easily accept a generic kung fu program.

Despite all these obstacles, Watanabe is optimistic. He thinks scientists, using techniques similar to decoded neurofeedback, soon will be able to essentially delete a person's unwanted, traumatic memories and enhance learning.

Kung fu, however, is not at the top of Watanabe's own priority list. For one thing, he says, it trails guitar playing, for one thing. "I wish I could play like Jimmy Page of Led Zeppelin."

Plausibility score: Full-fledged plug-'n'-play skill-learning as shown in "The Matrix" seems a long way off, though not implausible. Given rapid advances in brain/machine interfaces, computer technology and neuroscience, we give this sci-fi concept three out of a possible four rocketboys.