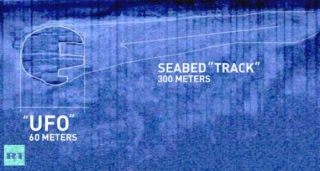 Last summer, a team of ocean explorers from Sweden spotted what appeared to be a 60-meter-wide, disc-shape object at the bottom of the Baltic Sea, situated at the end of a strip of smooth seafloor. When the team's sonar image of the object surfaced on the Web, UFO believers immediately took it for a sunken flying saucer that crashed into the ocean long ago, tearing across the seabed before coming to a stop.

The Swedish divers, who call themselves the "Ocean X Team," revisited the site earlier this year and claimed to find a second disc-shape object near the first. Life's Little Mysteries addressed both claims. But now, the team is back making headlines with new close-up images of their underwater find, taken during a recent exploratory dive. The divers say they've discovered an entrance in the top of the UFO-like object, as well as charred and soot-covered rocks scattered across it — remnants, perhaps, of its crash and burn through the atmosphere? [Gallery: Images of 'Sunken UFO']

"Normally, stones don't burn," Stefan Hogeborn, one of the divers at Ocean X Team, said in a press release. Peter Lindberg, the team's founder, added, "[Since] no volcanic activity has ever been reported in the Baltic Sea, the find becomes even stranger. As laymen, we can only speculate how this is made by nature, but this is the strangest thing I have ever experienced as a professional diver."

However, experts in remote imaging and geology say Lindberg and his team have let their imaginations run wild — or they're purposely misleading "wealthy tourists" who they told the press they hope to take on submarine tours of the site.

First, the experts have observed no signs of charring in the explorers' newly released photo of an underwater rock pile. "The description of 'charred rocks' is completely unwarranted," said Dan Fornari, a marine geologist at the Woods Hole Oceanographic Institution. And, even if the rocks are dark, that is to be expected, said Katherine Croff Bell, chief scientist at the Nautilus Exploration Program. "In contrast to rocks found on land, practically all rocks that have been underwater for a long time are black, so their color doesn't necessarily indicate volcanic or burned origin," she told Life's Little Mysteries.

Furthermore, despite the divers' claim that the UFO-like object "had an egg-shaped hole leading into it from the top, as an opening," a photo of this notable feature is conspicuously absent from their press release. The divers also do not disclose whether the object, upon close inspection, appeared to be rocky or metallic — surely, an important clue to its identity. [7 Huge Misconceptions about Aliens]

And why haven't they released any new images of the entire seafloor feature? The only image in existence is the eyebrow-raising one the team took last summer using sonar scanning. "The sonar image has numerous artifacts in it that make it difficult to interpret, and I would not place too much confidence in any interpretation until a better processing is done and the details of the type of sonar and particulars are provided," said Fornari, an expert on sonar scanning of marine geologic features. "I'm saying the data are lacking in resolution, detail, and quantification."

The image does have some details added to it by the Ocean X Team. They outlined the seafloor feature — whatever it is — exaggerating its resemblance to the Millennium Falcon spaceship from "Star Wars," and drew borders on the "track" leading up to it. This speaks volumes, said Jonathon Hill, a research technician at the Mars Space Flight Facility at Arizona State University, who analyzes images of Mars surface features taken during NASA's Mars missions.

"Drawing a picture of the Millennium Falcon over the sonar image? That only forces your imagination to see patterns that almost certainly don't really exist," Hill said.

The alleged "track" of cleared material doesn't appear to really be there either, he said; the "track" lacks a bottom edge, while the sharp top edge that appears in the image isn't actually present on the seafloor: "Notice how the entire top of the image is much darker than the rest of the image, almost like there's a dark strip along the top? That's a type of image artifact we call an edge effect, and it's something we regularly see in a lot of remote sensing imagery. I'm certain that if they collected another sonar image centered on the 'track,' they would see gentle blending [of the seafloor] and it suddenly wouldn't look like a track at all."

As Fornari put it, "The whole thing is pretty unbelievable, frankly."