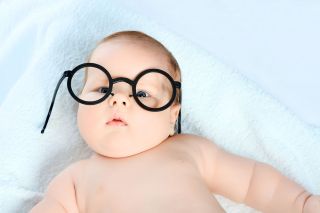 Quantum mechanics, the bizarre set of rules that govern the behavior of elementary particles, is notoriously confounding. Even Albert Einstein — winner of a Nobel Prize for his work in the field — thought there was something dicey about the whole business. But then again, he was a grown man.

Einstein's chances of truly comprehending quantum mechanics dried up while he was still in diapers.

Newborn babies are the only people alive who intuitively understand quantum mechanics, says Seth Lloyd, an expert on quantum computing and professor of mechanical engineering at the Massachusetts Institute of Technology. At a panel discussion held Friday (June 1) at the fifth annual World Science Festival in New York, Lloyd discussed the strange behavior of the elementary particles, and why babies get it.

According to quantum mechanics, particles are neither here nor there, but both places at once (and everywhere in between). Think of them as more like a cloud or a wave than a ping-pong ball. They maintain this fuzziness until you go looking for them, at which point they suddenly (and very conveniently) adopt a single location. Furthermore, their fuzziness allows them to pop in and out of existence, travel through walls and become inextricably entangled with one another even when they're light-years apart. [The Funniest Theories in Physics]

Today most physicists just accept these counterintuitive quantum behaviors, but when the pioneers of the field first stumbled upon them, they were dubious indeed. ("God does not play dice," Einstein famously said.) The rules just don't jive with our understanding of the world. Human-scale objects, from ping-pong balls to elephants, can be in only one place at one time, and to get from one place to another, they must travel between the two locations along a single path and at a finite speed.

Why the different rules at the subatomic and human scales? It turns out that the more particles there are banded together, the less fuzzy they are. Particles act as mutual watchdogs, keeping one another from straying too far or acting too strangely. So, once you zoom out from the scale of individual particles to the huge conglomerations of particles on the human scale, everything acts pretty normal.

Normal to us, that is, because we're used to the way things work in the land of the living. Fresh out of the womb, babies aren't used to anything. That's why, up until the age of 3 months or so, quantum physics seems just as plausible as human-scale physics (though babies may lack the vocabulary to tell you so).

The proof is "peekaboo," that beloved baby game. "Babies lose their intuition for quantum mechanics when they're about 3 months old, which is the age when they learn to play peekaboo," Lloyd said. When you play the game with an infant who is younger than 3 months (or slightly older, depending on the child), covering your face with your hands elicits no response. The baby simply looks away. "She'll just be like, 'Daddy left the room,'" he said. Similarly, when you can't see an electron, it could be anywhere — in this room or the room next door.

Other experiments have shown the non-reaction isn't just a case of babies ignoring their parents. Infants in the first few months of life make what are called A-not-B errors. They'll look for a toy under box A if they've found it there in the past, even if they've just watched someone put the toy under box B. Because they cannot see the hidden toy, they think it could be absolutely anywhere.

And with that giggle, she has lost her ability to feel comfortable with the concept of an object existing anywhere at any time. "She has gained a sense of object permanence," he said, "which means her intuition for quantum mechanics has disappeared."

And she, like the rest of us, will never really grasp it again.