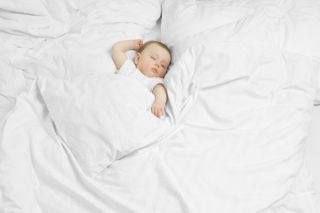 Nothing appears more peaceful than a sleeping baby. But behind that serene little expression, are fantastic dramas unfolding, like theater performances behind closed stage curtains? Or is the stage vacant?

According to the psychologist David Foulkes, one of the world's leading experts on pediatric dreaming, people often mistakenly equate their babies' ability to perceive with an ability to dream. "If an organism gives evidence that it can perceive a reality, then we are prone to imagine that it can dream one as well," Foulkes wrote in "Children's Dreaming and the Development of Consciousness" (Harvard University Press, 2002). But considering babies' limited pool of experiences and their brains' immaturity, Foulkes and other neuroscientists think they are actually dreamless for the first few years of life.

That's in spite of the fact that, from birth onward, sleeping babies enter the REM (rapid eye movement) sleep phase — the one in which adults dream. And boy, do they: Newborns spend half their sleep time in REM, accompanied by jerking eyeballs, twitching bodies and a characteristic saw-toothed pattern on brain scans. For comparison, adults spend just one quarter of their sleeping time in REM and the rest in the dreamless non-REM phase, marked by slowly varying brain waves. If babies did dream during REM, then they would dream for the equivalent of a full eight-hour workday. That would be a lot of mileage to get out of the few images they've collected of their bedroom, toys and parents' faces. [ Why Don't We Remember Being Babies?]

Instead, neuroscientists believe REM sleep serves a completely different role in newborns and infants: It allows their brains to build pathways, become integrated and, later, helps them develop language. (Similarly, juvenile birds learn songs during REM sleep.) While all that grunt work is going on, they lack the head space and the ability to imagine themselves as the heroes of baby adventures, or to dream up fantasy toys.

Dreaming, neuroscientists think, is a cognitive process that arises in early childhood, once children have acquired the capacity to imagine things visually and spatially. According to research by Foulkes and his colleagues, even children at the ripe old age of 4 or 5 typically describe dreams that are static and plain, with no characters that move or act, few emotions and no memories.

Vivid dreams with structured narratives set in at age 7 or 8, around the same time children develop a clear understanding of their own identity. Researchers think self-awareness is necessary for the insertion of the self into dreams. In fact, the amount of self-knowledge a child possesses — her understanding that she would be the same person even if she had a different name, for instance, and that she is the same person as she was when she was a baby — strongly correlates with the vibrancy and amount of plot structure in that child's dreams.

When Foulkes' findings on dreaming in children are related to infants, neuroscientists come to the rather disappointing conclusion that babies don't dream much of anything. Their brains are otherwise engaged.