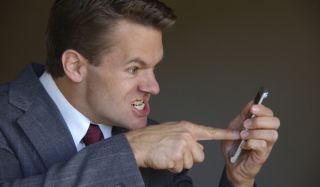 Do you ever feel your phone vibrating in your pocket or purse, only to retrieve it and be met by eerie, black-screened lifelessness? If, like most people, you occasionally experience these "phantom vibrations," it turns out it's because you're a little bit nuts.

Or, scientifically speaking, you're having "sensory hallucinations."

So says Michael Rothberg, a researcher at Baystate Medical Center in Springfield, Mass., who, last year, studied the strange phenomenon among the doctors and other medical staff at Baystate. He discovered that over 70 percent of those polled had experienced a phantom vibration in the past and some of them were spooked by ghost cellphone rings daily.

As Rothberg recently explained on ScienceLine, these hallucinations are, essentially, errors in perception casualties of the brain's struggle to make sense of the constant barrage of data flooding in from the outside world.

"You get a tremendous amount of sensory information that's coming in from your eyes, from your ears, from your skin, and you can't deal with all that information all the time," Rothberg told Rose Eveleth, the host of ScienceLine's podcast. [How Does Acid Make People Trip? ]

"And so as you get these different types of sensory inputs coming in, and your brain is trying to filter them out and trying to make sense of them, it makes sense of them in terms of what it's used to looking for," he said. "So for people who are getting messages all the time those messages are positive or they're excited to get those messages or they're important so they're worried about missing those messages they're constantly searching for something that might seem like a message coming in."

While hunting-and-gathering in prehistoric times, we would have been on the lookout for snakes, and were probably constantly getting spooked by curvy sticks. Today, most of us are techno-centric , and so our brains misinterpret everything from the rustle of clothing to the growling of a stomach, jumping to the false conclusion that we're getting a call.

There's no need to get freaked out by the fact that you, and roughly 70 percent of the people around you, hallucinate on a regular basis. "Hallucinations sound like mental illness, and this is not mental illness, this is a normal thing that pretty much everybody experiences," Rothberg said.