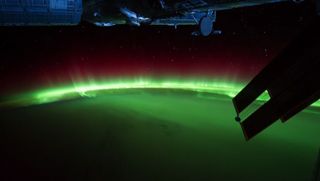 For all those who've ever yearned to look out the window of the International Space Station and see the magnificent Earth pass by beneath it, an incredible new video offers a five-minute glimpse. And it's even more breathtaking than you might have guessed.

Designer and artist Michael König of Berlin, Germany, created this time-lapse sequence of photographs taken by Ron Garan, Satoshi Furukawa and the crew of expeditions 28 and 29 onboard the International Space Station from this past August to October. König believes the photos of Earth were taken from 217 miles (350 kilometers) up — a typical orbital altitude for the International Space Station (ISS) — and says they were captured at a rate of 25 pictures per second.

Very little color adjustment or other digital editing was done to the images before they were stitched together, "since in my opinion, the original footage itself already has an almost surreal and aesthetical visual nature," König explained at Vimeo, the site where he uploaded the video. However, he sped up the footage so that "this is way faster than realtime," he told Life's Little Mysteries.

Perhaps the most striking feature of the scenery is the nonstop display of auroral lights dancing above Earth's surface. The video begins with the Aurora Borealis — the Northern Lights — flickering above the United States. It later shows the Aurora Australis, the Borealis' dazzling southern counterparts, above Australia.

These auroras are triggered by charged particles from the solar wind interacting with Earth's atmosphere. When the particles — a mix of electrons and positively charged ions — reach Earth from space, they travel toward Earth's poles along the planet's magnetic field lines. Many of them collide with atoms (primarily oxygen and nitrogen) in a high-altitude layer of the atmosphere called the thermosphere. This excites the atoms, causing them to emit particles of light, or photons.

Astronauts onboard the ISS frequently witness and photograph these stunning light displays. In July, astronauts on the space station and space shuttle Atlantis took a series of incredible aurora photos from the ISS.

Viewers might be amazed to learn how clearly astronauts can see city lights, too — especially those along heavily populated coastlines. The twinkling coasts make it easy to see the outline of the United States, Africa, Australia and many other places. At 2:40 in the video, for example, one sees the ISS pass over the Nile River at dusk. Artificial lights can be seen flanking the river banks, creating a ribbon of light that mirrors the river's natural shape.