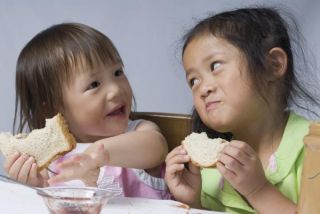 Say you like beets, or maybe you live off of Cool Ranch Doritos. Can you blame your mom's diet when you were still a zygote for some of your weird food preferences?

Actually, you might be able to. "There is strong evidence that as a fetus, you are able to detect food even all the senses may not be up and running," said Gary Beauchamp, a taste scientist at the nonprofit Monell Chemical Senses Center in Philadelphia, PA. So the adage you are what you eat may not apply.

"You are what your mother eats," said Beauchamp.

One study in 2005 looked at the how much 2-month old babies liked the taste of salt. Babies were offered bottles of liquid with different amounts of salt in them ranging from regular water to chicken-soup-salty to super-soup-salty. The babies were tested four months later, and then three years later. It turned out that the children that preferred the super-salty-solution had mothers who had extreme nausea during their first trimester, and had eaten a lot of salty foods to try to settle their stomach.

In another study, scientists at the University of Missouri gave loads of carrot juice to women in the last trimester of pregnancy. At age 6 months, babies drank carrot juice for the first time, and those who'd been exposed to it in the womb appeared to enjoy it more than babies who hadn't been exposed. Beauchamp said this shows how components of flavor can transmit through amniotic fluid, which fetuses begin swallowing at around 12 weeks. At around 28 weeks, fetuses begin to respond to odors, another important component of flavor.

Taste preferences aren't just created in the womb they can also be developed in the first few months of life. When given an icky-tasting hydrolyzed-protein formula before the age of 3 months, infants don't mind the taste, then or later on. But if they don't taste it until later in life? Not even a chance of sucking it down. Beauchamp and his colleagues call this process "flavor programming."

There's an evolutionary reason to all of this taste preference, said Beauchamp. "We're an omnivorous species; the idea is that you learn what your mother ate while still in the womb, and then you'll know the flavors that are available and safe for you," he said.

So next time your friends bug you about hogging the pretzels, just blame your mom.