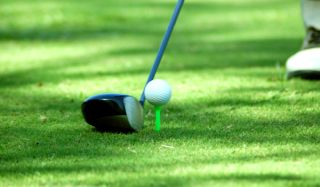 Nowadays, most golfers yell "fore" only after they've hit an errant shot toward an unsuspecting golfer, but the term which translates to "watch out!" or "heads up!" was originally intended to be used before teeing off.

The prefix "fore-" originated during the Middle Ages and, in general, indicates that something is "ahead" or "in front of." "Foremost," "foretold," "forerunner" and "foreman," for example, all mean something or someone that is initial or first.

In the 1700s and 1800s, the golf term "forecaddie" described a person hired by golfers or courses specifically to keep track of where each ball landed, according to the United States Golf Association. The forecaddie would walk ahead of the group and stand in the area where the balls were most likely to land. He would then let each player know where their ball had rolled, both saving them the time of locating it and reducing the number of lost balls.

Because the forecaddies often stood a considerable distance away from the rest of the group, the players would yell out "forecaddie!" to let them know that a ball was coming and that they should pay attention to where it falls.

Over time, the term shortened "fore" and is currently used to warn others that they'd better make sure they're not in the struck ball's path . Although most golfers now only hire a caddie to carry their clubs, forecaddies are still used in professional golf tournaments, but they are more commonly referred to as spotters.