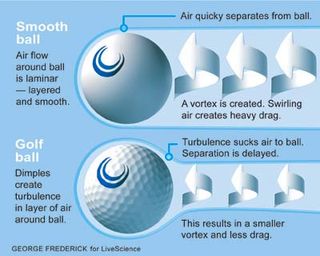 About a century ago, after someone realized that a scuffed-up ball travels farther than a shiny new one, balls gained dimples. Now manufacturers invest millions of dollars each year to design better performing golf balls.

The dimples in golf balls create turbulence, or mixed airflow, which, if done right, reduces drag.

Here's how it works:

There are two main types of airflow — laminar and turbulent. Laminar movement creates less drag but is vulnerable to "separation" — a phenomenon whereby the air layer that clings to the ball as it moves through the air separates from the ball. Turbulent flow creates more drag initially, but is less vulnerable to separation.

At high speeds, like that of a flying golf ball, you want this air layer to cling to the ball as long as possible, and the added dimples do just that.