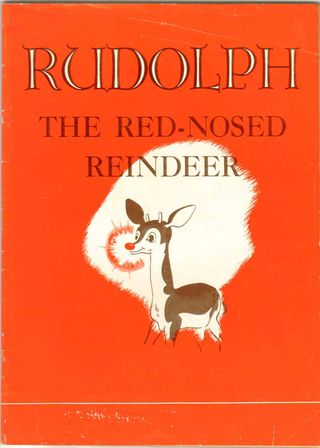 What do you mean "invented"? Rudolph was born at the North Pole and, with his nose so bright, has long been guiding Santa's sleigh through blizzards. Case closed.

Okay, have the kids gone to bed? Here's the real story. Flash back to Chicago, 1939. For years, the Montgomery Ward department store chain had handed out free coloring books to children in its stores at Christmastime. But, realizing that it would cost less to make its own giveaway books, the company asked one of its copywriters, Robert L. May, to create a Christmasy book it could produce and hand out instead.

May came up with the idea for a red-nosed reindeer named Rudolph -- although he also considered naming him "Reginald" and "Rullo" -- that would save Christmas and wrote his story in the same rhyming scheme as "'Twas the Night Before Christmas." The book was something of a surprise hit: In that first year of publication, Montgomery Ward distributed 2.4 million copies of the book.

The poem was later adapted into song by May's brother-in-law, songwriter Johnny Marks. It wasn't until Gene Autry recorded the tune in 1949, though, that the song gained popularity, selling 2.5 million records that year.