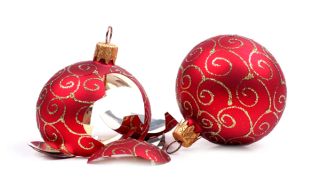 It may seem like Christmas has always been celebrated in the United States, but that's not the case. In fact, the joyous religious holiday was actually banned in America for several decades by Christians themselves.

The original war on Christmas was waged during the sixteenth and seventeenth century by Puritans, or Protestant Christians who believed that people needed strict rules to be religious and that any kind of merrymaking was sinful.

"Shocking as it sounds, followers of Jesus Christ in both America and England helped pass laws making it illegal to observe Christmas, believing it was an insult to God to honor a day associated with ancient paganism," according to "Shocked by the Bible" (Thomas Nelson Inc, 2008). "Most Americans today are unaware that Christmas was banned in Boston from 1659 to 1681."

All Christmas activities, including dancing, seasonal plays, games, singing carols, cheerful celebration and especially drinking were banned by the Puritan-dominated Parliament of England in 1644, with the Puritans of New England following suit. Christmas was outlawed in Boston, and the Plymouth colony made celebrating Christmas a criminal offense, according to "Once Upon a Gospel" (Twenty-Third Publications, 2008).

Christmas trees and decorations were considered to be unholy pagan rituals, and the Puritans also banned traditional Christmas foods such as mince pies and pudding. Puritan laws required that stores and businesses remain open all day on Christmas, and town criers walked through the streets on Christmas Eve calling out "No Christmas, no Christmas!"

In England, the ban on the holiday was lifted in 1660, when Charles II took over the throne. However, the Puritan presence remained in New England and Christmas did not become a legal holiday there until 1856. Even then, some schools continued to hold classes on December 25 until 1870.

Although the change was gradual, people began to once again embrace the holiday until Christmas as we know it today complete with mistletoe, eggnog and candy canes was celebrated throughout the American colonies.