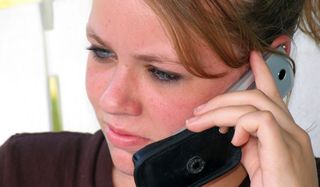 The question of whether cell-phone radiation can cause cancer pops in and out of the news, with the most recent splash suggesting "a growing number of independent researchers disagree," with the National Cancer Institute stance that the phones are safe to use, according to Women's Health magazine.

All known cancer-inducing agents , such as ionizing radiation and certain chemicals, act by breaking chemical bonds to produce DNA mutations. Ionizing radiation includes gamma rays, X-rays, most ultraviolet light and certain subatomic particles, all of which produce waves with enough energy to detach an electron from an atom. This process can lead to molecular changes that can, in turn, cause damage in biological tissue, including DNA.

Lower-energy, non-ionizing radiation from light bulbs and cell phones can't do damage unless there's enough focus to heat tissue, according to LiveScience's Bad Medicine columnist Christopher Wanjek. Even if cell phones could deposit harmful heat, circulating blood should dissipate it, he added.

But Women's Health refers to mounting scientific evidence suggesting otherwise that the non-ionizing type of radiation can damage our immune systems and alter our cellular makeup, even at intensities considered safe by the FCC.

The article points to the Interphone Study, which itself has been a point of controversy. In May when the report was published online in the International Journal of Epidemiology, Interphone researcher Siegal Sadetzki, a public health physician at Tel Aviv University's Sackler School of Medicine told ScienceNews, "If you look at the overall evidence, this study did not confirm or dismiss the possible association between cell phones and brain tumors. That's the bottom line."

In fact, in the group of participants who had less frequent cell phone use, brain tumor risks were substantially lower than those seen in people who used corded telephones. In other words, the cell phones appeared to protect against brain tumors. The study researchers as well as outside experts concede this protective effect is likely not real and may be a product of flawed study design.

Participants who used cell phones the most and the longest (for at least 10 years and on average at least 30 minutes a day), risk of brain tumors called gliomas was elevated compared with people who didn't use cell phones.

Two scientists who wrote an accompanying editorial in that journal edition, noted the possible biases and errors the study was susceptible to, and if those were accounted for they would diminish the tumor risk found, even among the highest exposure group, ScienceNews reported.

The scientists told ScienceNews that Interphone "tells us that the question as to whether mobile phone use increases risk for brain cancers remains open."

This article was provided by LiveScience, a sister site to Life's Little Mysteries.