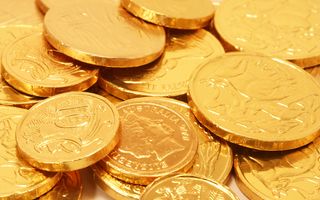 Why did gold become the standard for money? Why not copper or platinum or argon? A chemical engineer explains.

An element must meet four qualities to stand alone as a premium currency, Sanat Kumar, the chair of the chemical engineering department at Columbia University told NPR. First, it can't be a gas — gases simply are not practical for currency exchange. That knocks out a bunch of contenders from the right side of the periodic table, including the Noble gases, which would meet the other three qualifications.

Second, it can't be corrosive or reactive — pure lithium, for example, ignites when exposed to water or air. Iron rusts. This qualification knocks out 38 elements.

Third, it can't be radioactive. For one thing, your money would eventually radiate away to nothing . For another, Kumar pointed out, the radiation would eventually kill you . This eliminates the two rows that are separate from table, the elements known as actinides and lanthanides.

Any of the 30 or so remaining elements would make nice, stable forms of currency if they met the fourth qualification: They must be rare enough to be valuable, but not so rare that it's impossible to find .

That brings us to five elements, according to Kumar: rhodium, palladium, platinum, silver and gold.

Although silver has been used for currency, it tarnishes easily, so it's out. Rhodium and palladium were discovered only in the 1800s, so they'd have been of no use to early civilizations. That leaves gold and platinum. Platinum, however, has a melting point around 3,000 degrees Fahrenheit (about 1,600 degrees Celsius), which, Kumar noted, could only be attained in a modern furnace, so early civilizations would not have been able to conveniently shape it into uniform units.

That leaves gold, which is solid but malleable, doesn't react, and won't kill you. It is truly the gold standard.