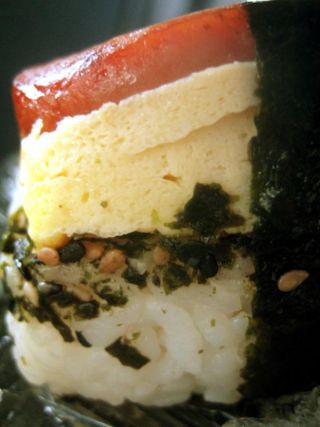 Spam musubi is a popular treat in Hawaii. This one was made from spam, egg, rice and seaweed.
(Image: © Jimrubio | stock.xchng)

Though often jokingly referred to as the supermarket equivalent of the "mystery meat" consumed in school cafeterias, there really is no puzzle about what constitutes Spam, the rectangular meat many of us have come to love.

After all, the contents are clearly labeled on the can: Pork with ham meat added, salt, water, potato starch, sugar and sodium nitrite.

The pork is from the shoulder portion of pigs , according to spam.com. Salt, water and sugar are familiar to us all, so that leaves potato starch and sodium nitrite that need explanation.

The food processing industry uses potato starch as a thickener, binder or gelling agent. In Spam it's a binder, which means it holds the bits of pork together.

Sodium nitrite does two important things in meat. It significantly delays the development of bacteria a good thing since some bacteria can cause botulism by releasing a deadly toxin to humans. It also gives meat products their pinkish or reddish tints. Without sodium nitrite, meats would soon turn a gray color and be decidedly less appealing.

How Spam came to be

Spam was invented in 1937 by Jay Hormel, who was looking for a way to sell the underused shoulder portions of hogs. But the product was first just one of many spiced ham products on the market. When Hormel's product started losing market share to other meatpackers, he decided to distinguish his brand.

So Hormel held a naming contest, offering a $100 reward to the person who could develop the best moniker -- that would be equal to $1,568 today.

An actor named Kenneth Daigneau coined the name and won the prize, according to Hormel Foods Corporation. What Hormel's website won't tell you is that Daigneau was the brother of R.H. Daigneau, a former Hormel Foods vice president, according to "Polish Your Furniture with Pantyhose" (Joey Green, 1995). Skill or nepotism? You be the judge.

In World War II, more than 15 million cans of Spam were used to feed allied troops every week, according to Hormel. Once the war ended, Margaret Thatcher, Nikita Khrushchev and Dwight D. Eisenhower said Spam played a huge role in the victory. In fact, Khrushchev claimed that without the canned meat, Russia wouldn't have been able to continue feeding its soldiers.

Spam has had its fair share of the limelight. What is thought to be the first singing commercial, produced in 1940, was an ad for Spam. It has been featured in a Monty Python skit, and sponsored the No. 9 car on the NASCAR Winston Cup Series in 1995.

A Spam tin was donated to the Smithsonian in 1998, and in 2000, it was featured on lottery tickets in Minnesota.

Each year, 90 million cans of the Spam family of products are sold in the United States, which works out to three cans every second, according to Hormel. Hawaii is the state with the highest consumption per capita it's sold in restaurants and convenience stores there. The most popular way to eat it is in a sushi-type roll , called Spam musubi.