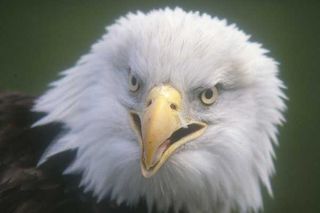 Along with an official flower and motto, every state has its own official bird. But flying high above them all is the bald eagle, representing the United States of America. Images of the iconic bird can be found just about everywhere, from coins and paper currency to passports and the president's official seal. But why this bird?

The idea for using the bald eagle to symbolize America was proposed in 1782, when a drawing of the eagle was presented to the newly-formed Congress, according the U.S. National Archives. It was immediately accepted, and soon an olive branch and arrows (representing peace and war, respectively) were included in the eagle's talons.

The bald eagle was officially adopted as the emblem of the United States five years later, in 1787.

The bald eagle was chosen because of its association with authority and statehood in fact, the eagle had been used as a symbol of governmental power since Roman times.

President John F. Kennedy added to the list of noble descriptors when he wrote to Charles Callison of the National Audubon Society on July 18, 1961: "The founding fathers made an appropriate choice when they selected the bald eagle as the emblem of the nation . The fierce beauty and proud independence of this great bird aptly symbolizes the strength and freedom of America."

Given some of the other possible options (crows, hummingbirds, chickens, etc.) the bald eagle seems an obvious choice in retrospect.