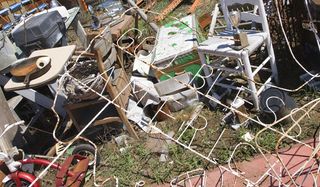 The growing awareness of excessive hoarding has sparked debate over the cause and definition of the mental illness.

Hoarding is the excessive collection of items, along with the inability to discard them, according to the Mayo Clinic. Hoarders can collect everything from old newspapers to clothes and furniture. Some even hoard pets, creating an unsafe and unsanitary environment for themselves as well as the animals.

Those who have suffered a traumatic loss may be more likely to become hoarders than those who haven't.

"Research is being done on hoarding among foster children because it has been noted that there appears to be a higher prevalence rate among them than among non-foster children," said Elaine Birchall a social worker who counsels hoarders in Ontario, Canada. "Given the correlation with traumatic loss among adult hoarders, this isn't surprising."

Some people develop hoarding tendencies after experiencing a stressful life event that they had difficulty coping with, such as the death of a loved one, divorce, eviction or losing their possessions in a fire, according to The Mayo Clinic.

While the exact cause of hoarding is not known, having certain other disorders puts a person at a higher risk of also developing hoarding behaviors, Birchall told Life's Little Mysteries.

Compulsive hoarding behaviors are more prevalent among people who also have obsessive compulsive disorder, anxiety disorders, personality disorders, depression, addictions, post-traumatic stress disorder, and those who have suffered a traumatic loss or are aging with mobility limitations, according to Birchall.

However, it is important to know that these disorders do not cause hoarding tendencies, Birchall said. For some, hoarding acts as a coping mechanism a conservative estimate of 2 percent to 2.5 percent of the U.S. population has a stress response that involves holding on to things because having more makes them feel safer and happier, according to Birchall.

Mental health experts also believe the disorder can be triggered by anxiety. In fact, this may lead to a change in the way the disorder is classified in the Diagnostic and Statistical Manual of Mental Disorders (DSM; the handbook mental health professionals use when diagnosing patients) which is being revised.

Some hoarders seem to feel unable to process all of the things that are part of their daily lives and feel "anxious, overwhelmed and ashamed" as the piles of clutter accumulate around them, according to Birchall. These people are often perfectionists and worry about making the right decision about what to do with each possession. The stress of trying to make a decision becomes too much for them, to the point where they avoid having to decide altogether by simply keeping everything.

Still others fail to see their hoarding behavior as a problem, which makes treatment challenging, according to The Mayo Clinic.

People with extreme hoarding tendencies can literally be putting their lives in danger. There are several reported cases of hoarders dying in their homes after piles of clutter collapsed, burying and trapping them underneath.

In one such case, a 62-year-old woman named Marie Rose suffocated to death in her Shelton, Wash., home after a two-meter (6-foot) high pile of clothes and debris collapsed on top of her in 2006, apparently while she had been looking for the telephone. According to news reports, it took police, with the help of her husband, 10 hours to find her body.

Animals are also unfortunate casualties of hoarding. For example, in 2005, 82-year-old Ruth Knueven was found to have a total of 488 cats 222 of which were deadin her two homes in Fairfax County, Va.