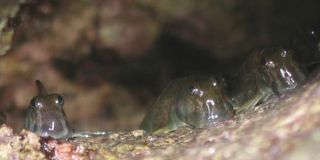 Scientists may be one step closer to solving the mystery of how ancient marine organisms made the transition to land. By studying leaping blennies, a strange fish that spends considerable time on land, researchers have gained insights into the mechanisms that may have played a key role in the move from surf to turf.

Blennies leap out of the waves, stake out territory and reproduce on rocky shorelines in the Pacific, explained S. Tonia Hsieh, now a researcher at Temple University, who conducted the study on blennies while at Harvard University.

Blennies spend their days hopping along in the intertidal zone the span of shore between the high and low tides.

The way the fish propel themselves into a jump tells scientists about how an animal's physiology may evolve under the right conditions, Hsieh said.

How they do it

To study this behavior, Hsieh used high-speed video to capture images of 60 individual fish as they leapt. She measured each fish's take-off angle, maximum speed and several other variables.

The images revealed exactly how the blennies leap. First, the fish curls itself into a 'C' shape. Then it straightens out explosively.

The key finding is that blenny twists its tail and pushes off the surface with the flatter side of its tail.

The blenny's strategy for twisting its tail is novel, and is different from how other species propel themselves. Other fish move forward through water by lateral undulation basically, they move side to side, like a snake. But side-to-side movement is not too efficient, Hsieh said.

"Twisting the tail is so much better than moving the tail from side to side," Hsieh said. "Tail twisting increases their stability and their control over where they go when they leap."

Another surprising finding: The blenny's muscles, tendons and skeleton are no different from those of other fish that don't twist their tails. It may be that the blenny's neurons activate the creature's muscles differently, but more analysis is needed to determine if there are physical differences, or if the behavior arose without any physical changes.

In blennies, leaping is under conscious control, but the behavior evolved from the reflexive behaviors, Hsieh said.

"This implies that, from an evolutionary stand point, they've co-opted a behavioral trait and begun using it in a new manner," Hsieh said. "It's interesting to consider how evolution can allow for dramatic transitions, how a behavior can evolve from an unconscious reflex."

Not a missing link

Scientists believe that the transition marine organisms made to land occurred after limbs developed so, as true fish that have fins, blennies do not represent a step in this transition, Hsieh said.

But they still offer scientists clues to the physiological changes that would have been necessary for such a transition to happen in limbed species.

"They show us how animals can use basic structures in novel ways on different surfaces," Hsieh told Life's Little Mysteries. "They show us how surfaces challenge the way we move, and how the motor control systems had to change to adjust for that."

The strange fish may also give insights into how a species can invade new territory when it's available.

"The intertidal zone is violent. Nothing else lives there the waves are heinous. Hsieh said. "But a simple innovation in terms of movement and behavior allowed a fairly dramatic transition into an open niche."

On rocky coasts, water gathers in shallow tide pools, and these are the abodes of the blennies. Upon leaving the water, a blenny stakes out a tide pool and will viciously its territory should another blenny approach with sinister intentions.

"First, there's head bobbing," Hsieh said, as the blenny warns the intruder not to come closer. "If it keeps coming, then they flare out their fins. They position themselves so their side faces the intruder, and shake their fins at them."

If the intruder comes too close, the defender will strike, biting the intruder. That's when things really heat up.

"They have these huge, acrobatic fights, they knock each other off the rocks," Hsieh said. The movements are so quick they can be difficult to track. It's like a break dancing fight."

The movements are so quick that keeping the blennies contained was a problem in the lab, Hsieh said.

Over the first night she had the fish, she lost half of them. "They all climbed out of their tanks and escaped," she said.

"I would be staring at a fish, and it would disappear, and it would suddenly reappear on the wall," she said. The 3- to 4-inch fish can move 16 body lengths in one second, the equivalent of a person getting 100 feet (30 m) away in one second.

On land, the fish survive by 'breathing' through their skin. They stay near the water's edge and they are always in the intertidal zone, Hsieh said.

When the tide is all the way out, the fish hide in their burrows and wait. The tiny burrows may be just 2 inches (6 centimeters) in diameter, with just 1 inch (2 centimeters) of water at their bottom. In these burrows, the fish are not submerged, but they do need to stay wet in order to breathe, Hsieh said.