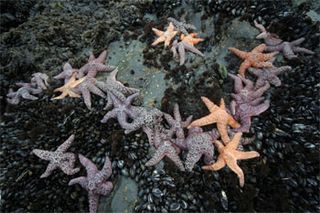 This sea star, Pisaster ochraceus, which is a predator along rocky shorelines on the Pacific coast, soaks up ocean water during high tide to stay cool.
(Image: © Sylvain Pincebourde ©.)

A species of sea star has figured out a novel way of keeping cool on rocky shorelines. The animal literally soaks up chilly water during high tides to protect itself from the blazing temperatures that persist when the tide goes out, scientists announce today.

Sea stars live at the ocean edge on rocky shorelines, and so they endure rapid changes in temperature as the tide comes in, covering them with chilly water, and then recedes to leave them bare to the sun's rays.

"Sea stars were assumed to be at the mercy of the sun during low tide," said the lead study researcher Sylvain Pincebourde of François Rabelais University in Tours, France. "This work shows that some sea stars have an unexpected back-up strategy."

Until now, scientists were not sure how the stars beat the heat. But Pincebourde suspected that  perhaps fluid-filled cavities in the star's arms might play a role.

So they placed so-called ocher sea stars, or Pisaster ochraceus, into aquariums kept at different temperatures and changed the water level to mimic tides. The animals exposed to higher temperatures were essentially bigger, or had a larger body mass, after the following high tide. The researchers figured that since the stars hadn't eaten, the mass must have been from the water.

"This reservoir of cool water keeps the sea star from overheating when the tide recedes again the next day," Pincebourde said.

The sea stars are likely cued during low tide that it's a hot day, the researchers say, and that signals them to soak up more water during the next high tide.

"It would be as if humans were able to look at a weather forecast, decide it was going to be hot tomorrow, and then in preparation suck up 15 or more pounds of water into our bodies," said study researcher Brian Helmuth of the University of South Carolina in Columbia.

That's fine and dandy for now, but the researchers say they worry that this cooling process may not hold up in a warming world.

"This strategy only works when the sea water is colder than the air," said study researcher Eric Sanford of the University if California, Davis. "Ocean warming might therefore break down this buffering mechanism, making this sea star susceptible to global warming. There are likely limits to how much this mechanism can buffer this animal against global change."

Another recent study, however, found that P. ochraceus might grow faster as the water warms.

The new research is published in the December issue of The American Naturalist.