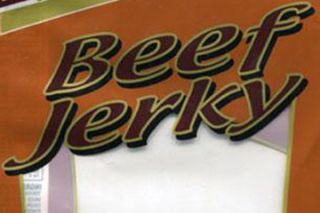 Recalls of meat contaminated with nasty microbes could turn a dedicated beef eater toward the produce aisle. But at least one meaty snack is about to get safer: beef jerky.

A modified method for small-scale jerky producers could keep tiny bugs out of the food chain, particularly E. coli O157:H7 and Salmonella involved in meat recalls, a new study finds.

Jerky has been around since ancient times, when humans made it from animal meat that would've been too much to eat all at once. A pound (450 grams) of animal meat weighs about four ounces (113 grams) after being made into jerky. To this day, it's a handy food for backpackers and others on the go, because it can be stored safely without refrigeration for up to about 12 months. (Home-dried jerky lasts one to two months).

"The number of small plants producing jerky and other meat products has declined rapidly since the 1990s," said researcher Elizabeth Boyle of Kansas State University. "The standards became more strict and, in some cases, harder to abide by. That trend has had a definite economic impact on small towns like those in Kansas that have traditionally been home to smaller-scale meat producers."

With funding from the U.S. Department of Agriculture's Food Safety and Inspection Service, Boyle, Kelly Getty of K-State and their colleagues tested out a jerky-making process that would destroy the pathogens while placing a minimal burden on small producers.

"We took that worst-case scenario, and we realized it didn't achieve the reductions needed for Salmonella and E. coli," Getty told LiveScience.

By drying the samples for an additional hour and a half at 154 degrees F (68 degrees C), the researchers found they could meet requirements of the USDA's Food Safety and Inspection Service.

Food science graduate student Nigel Harper, who was involved in the study, presented the results this month at the 13th Annual K-State Research Forum.