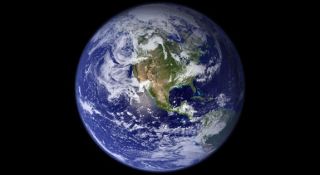 As passengers on Earth we are all carried around the sun at a mean velocity of 66,600 mph. Add to that dizzying notion the fact that we are spinning (at the equator) at a 1,000 miles-per-hour clip (an action that cause the planet to bulge outward).

Of course, these velocities are relative (to the sun and to the poles, respectively). The reason we don't feel the rush is the same reason we aren't pinned to our seats while in an airplane moving at constant speed. Velocity can only be measured with reference to another object moving at a different velocity, and we cannot feel velocity while in a constant frame of reference.

This is why it might be news to you that our entire solar system is whizzing around the center of our galaxy at a fairly inconceivable 560,000 mph. The galaxy is also moving with respect to other galaxies in the universe. And, for all we know, the whole universe is moving, but now we're getting into great unknowns.