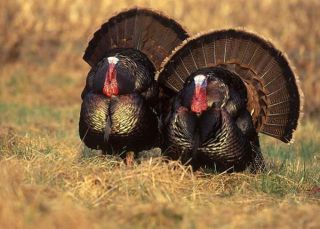 While the turkey you cook for Thanksgiving has never been airborne, wild turkeys can fly. Apparently not fast or high enough, however. Hunting by early Americans brought the wild turkey population to a low of just 30,000 birds back in the 1930s. Conservation efforts since then, including the release of pen-raised birds back to the wild, has restored the population to about 7 million today.

Wild turkeys feed on the ground, which may have something to do with the myth that they can't fly. The have to fly, however, because they roost in trees at night. Some accounts say they can soar up to 55 mph for short bursts.

Oh, and the Thanksgiving turkey: It is so grossly fattened up in the farm that it has about as much chance of flying as you do after your pumpkin pie.