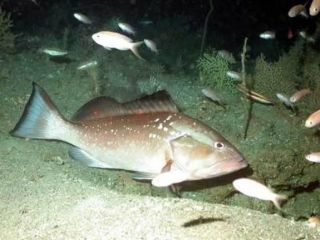 Can you hear me now? This red grouper (Epinephelus morio) probably hears more than you think, though not the conventional way. CREDIT: Courtesy, Florida State University Coastal and Marine Laboratory

Fish are, of course, excellent swimmers and can migrate around the globe, moving from oceans to freshwater streams and back out to sea again. But can fish hear?

Fish don't have ears that we can see, but they do have ear parts inside their heads. They pick up sounds in the water through their bodies and in their internal ear, according to the National Wildlife Federation.

Additionally, a fish can sense movement in the water with the lateral lines that runs down each side of its body. Sharks, which are fish, also have a keen ability to sense electricity.

Oddly, the genes that contribute to this ability are responsible for the head and facial features in humans, linking sharks and humans to a common ancestor way back in time.

There are other physical features that link humans to fish. For example, human ears, interestingly, evolved from fish gills.