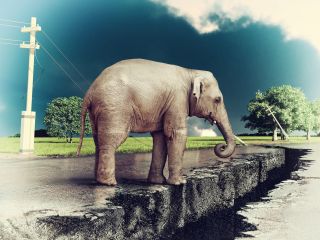 Can elephants and other animals predict earthquakes?
(Image: © Shutterstock)

The moment the ground stops shaking after an earthquake, some people may wonder whether their pets — or wild animals for that matter — knew the disaster was coming.

In other words, can animals predict earthquakes?

According to a new analysis of several other published studies (called a meta-analysis), it's hard to say. That's because "scientific evidence is lacking," said Heiko Woith, a seismologist at the German Research Centre for Geosciences (GMZ). So, given that there's no evidence yet showing that animals can predict quakes, people should be skeptical about these claims, he said. [Can Humans Cause Earthquakes?]

"Very likely, not every abnormal animal behavior is related to an upcoming earthquake," Woith told Live Science. Instead, it's likely that these animals are responding to foreshocks, that is, mild tremors that precede violent shaking, rather than predicting the earthquake itself, he said.

Woith noted that the public often contacts the GMZ after strong earthquakes, and that people commonly ask "whether we can predict earthquakes or not, because there are so many reports on the internet that an animal could do it."

To get to the bottom of this question, Woith and his colleagues evaluated more than 700 published reports of unusual behavior among 130 species, including insects, birds, fish and mammals (mostly cats, dogs and cattle) from 160 earthquakes, he said.

The records included all kinds of behaviors, including a tiger that reportedly got depressed before an earthquake, Woith said.

Despite the vast number of alleged incidences, good information was sparse, Woith said. "A major surprise for us was that the large majority of the published claims were built on poor observational data [meaning most people did not properly observe the animals before, during and after the earthquake], which did not stand as statistical scientific proof," Woith said.

The researchers found that 90 percent of all reported cases happened within 62 miles (100 kilometers) of the epicenter and within 60 days of an earthquake. Then, they examined when and where foreshocks had happened in the region. The resemblance was remarkable, they found.

"The space-time pattern of animal precursors and foreshocks is strikingly similar," Woith said. "From this, we concluded that at least some of the abnormal animal behavior might simply be related to foreshocks."

To better study whether animals can predict earthquakes, Woith and his colleagues suggested that researchers ask a number of yes-or-no questions in any upcoming experiments, including "Is the experimental setup and monitoring procedure clearly described and reproducible?" and "Is it proven that the animal behavior is really unusual?"

The review was published online April 17 in the journal Bulletin of the Seismological Society of America.

Meanwhile, humans are working on technologies that can detect earthquakes seconds before they hit. For instance, a beta smartphone application called Quake Alert helped alert people in Los Angeles that an earthquake was coming about half a minute before it struck on April 5, 2018, Live Science previously reported. The app works by relying on a network of seismic sensors that detect P-waves — the first energy waves that radiate from an earthquake — and then notifying people before the more powerful S-wave, or shear wave, arrives.