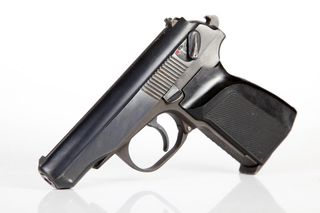 The current discussion on gun violence in American society might suggest vast differences in opinions on the topic.

Regardless of the tragedy — last year's Newtown, Conn., and Aurora, Colo., massacres, last month's accidental shooting in Kentucky of a two-year-old girl by her five-year-old brother, or last week's gun murder in [fill in any city] — two opposing views seem to emerge: Sensible gun control could have prevented this, and you're crazy to think otherwise; or, more gun control would have done nothing to prevent this, and you're crazy to think otherwise.

Yet a new book edited by researchers at Johns Hopkins School of Public Health attempts to present gun policies that most everyone agrees on, presenting the output of a summit on the topic organized by Johns Hopkins and held in January.

"The book focuses on policies that will reduce gun violence, are constitutional, and have strong public support," said Daniel Webster, a co-editor and director of the Johns Hopkins Center for Gun Policy and Research, Baltimore. "The bulk of our recommendations focuses on policies designed to keep firearms — all firearms — from high-risk groups like criminals, perpetrators of domestic violence, substance abusers, adolescents, and individuals whose mental illness is so severe that they are a danger to others and/or to themselves."

Webster added that none of the experts who contributed to the book are suggesting to "remove all guns" from American society, or to deny "a legal gun possessor's right to keep guns for self-defense in the home."

The recommendations, based on scientific evidence and Constitutional scholarship, include a universal background check system for all persons purchasing a firearm, even through private, Internet-based sales; an expansion of the set of conditions that disqualify an individual from legally purchasing a firearm to include people with serious mental illness, those who have committed violent misdemeanors, alcoholics, individuals who violate domestic violence restraining orders, and persons under age 21; and financial incentives to states to mandate childproof or personalized guns.

In the book, data from surveysreveal that 84 percent of gun owners support requiring a background check system for all gun sales to make sure a purchaser is not legally prohibited from having a gun.

The book also highlights facts on gun violence beyond the context of mass murders and street violence. In short, guns purchased for protection do not always offer that protection.

For example, among the 31,000 gun deaths in 2010, 62 percent were suicide. Firearm suicide rates and overall suicide rates in the United States are higher where guns are more prevalent, according to Matthew Miller of the Harvard Injury Control Research Center, Boston, a chapter contributor.

Similarly, recent studies of the stand-your-ground law — which expands a person's right to use deadly force in self-defense — have found this has been associated with about an 8 percent increase in rates of murder and non-negligent manslaughter, Webster told LiveScience.

The underlying theme is that a rash decision (such as suicidal thoughts, or anger), coupled with easy access to an effective killing method (a gun) can have deadly consequence. Minus the gun, suicide deaths and fighting deaths were less common.

The book additionally documents successes in Australia and Brazil — which are not entirely unlike the United States in terms of income inequality and a frontier mentality. Through a voluntary program, Australians scrapped a third of their firearms since 1996 and have experienced a 55 percent reduction in gun deaths. The country has nearly halved its number of gun-owning households. In Brazil, newly enacted guns laws have steadily reduced deaths by firearms, from 39,284 in 2003 to 34,300 in 2010.

The two editors, which include Jon Vernick, co-director of the Johns Hopkins Center for Gun Policy, said they hope their book presents evidence to show that Americans agree on gun control more than the shouting messages in the news media and Internet would lead one to believe.