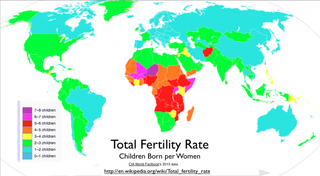 Birth rates around the world. The replacement rate (the birthrate at which a country's population will eventually level off) is 2.19 births per woman.
(Image: © WikiMedia Commons)

Birth rates have declined significantly in many areas of the world, to a degree that is perhaps overlooked.

This is particularly true in India, where the fertility rate is 2.5 children born per woman. Compare that to America's, estimated at 2.1 births per woman in 2011. "I find it extraordinary that the massive global drop in human fertility has been so little noticed by the media, escaping the attention of even highly educated Americans," writes Stanford University geographer Martin Lewis in a post at the Breakthrough Institute.

In his post (as summarized by the Washington Post's WonkBlog), Lewis suggests this drop could be due to a number of factors, including rising incomes and increasing female literacy. But no single factor correlates with birth rates better than TV ownership and media exposure, he said.

What's the connection? According to a study Lewis cites, "cable television is associated with significant decreases in the reported acceptability of domestic violence towards women and son preference, as well as increases in women's autonomy and decreases in fertility." Lewis continues: "Television depresses fertility because many of its offerings provide a model of middle class families successfully grappling with the transition from tradition to modernity, helped by the fact that they have few children to support."